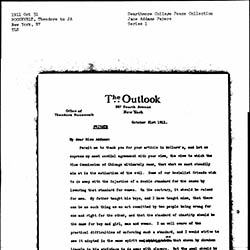 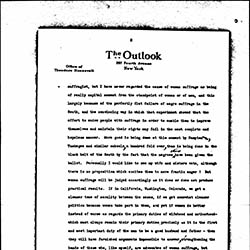 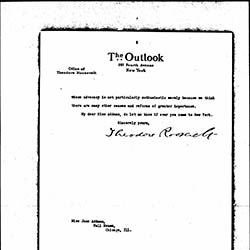 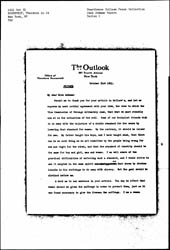 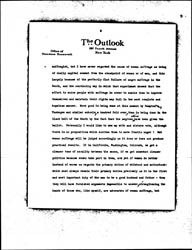 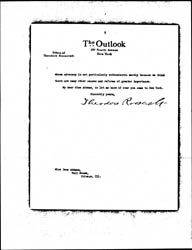 Permit me to thank you for your article in McClure's and let me express my most cordial agreement with your view, the view to which the Vice Commission of Chicago ultimately came, that what we must steadily aim at is the extinction of the evil. Some of our Socialist friends wish to do away with the injustice of a double standard for the sexes by lowering that standard for women. On the contrary, it should be raised for men. My father taught his boys, and I have taught mine, that there can be no such thing as an act committed by two people being wrong for one and right for the other, and that the standard of chastity should be the same for boy and girl, man and woman. I am well aware of the practical difficulties of enforcing such a standard, and I would strive to see it adopted in the same spirit [illegible] <as> that shown by Abraham Lincoln in his strivings to do away with slavery. But the goal should be distinct before us.

A word as to one sentence in your article. You say in effect that women should be given the suffrage in order to protect them, just as it was found necessary to give the freeman the suffrage. I am a woman [page 2] suffragist, but I have never regarded the cause of woman suffrage as being of really capital moment from the standpoint of women or of men, and this largely because of the perfectly flat failure of negro suffrage in the South, and the convincing way in which that experiment showed that the effort to endow people with suffrage in order to enable them to improve themselves and maintain their rights may fail in the most complete and hopeless manner. More good is being done at this moment by Hampton, Tuskegee and similar schools, a hundred fold over, than is being done in the black belt of the South by the fact that negroes <there> have been given the ballot. Personally I would like to see my wife and sisters vote, although there is no proposition which excites them to more frantic anger! But woman suffrage will be judged accordingly as it does or does not produce practical results. If in California, Washington, Colorado, we get a cleaner tone or morality between the sexes, if we get somewhat cleaner politics because women take part in them, and yet if women do better instead of worse as regards the primary duties of wifehood and motherhood -- which must always remain their primary duties, precisely as it is the first and most important duty of the man to be a good husband and father -- then they will have furnished arguments impossible to answer, strengthening the hands of those who, like myself, are advocates of woman suffrage, but [page 3] whose advocacy is not particularly enthusiastic merely because we think there are many other causes and reforms of greater importance.

My dear Miss Addams, do let me know if ever you come to New York. 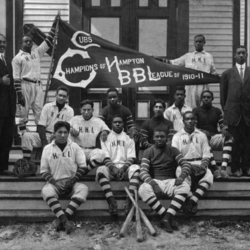 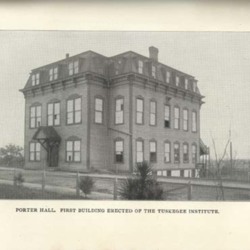 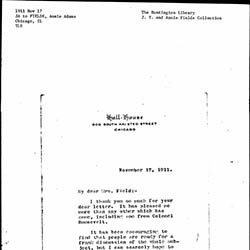