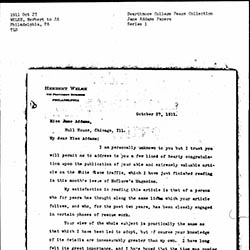 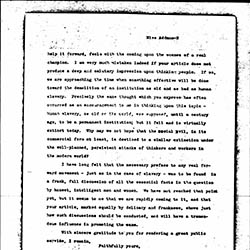 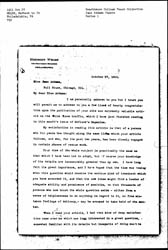 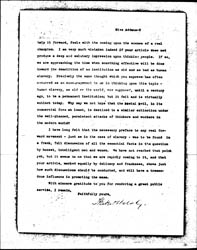 I am personally unknown to you but I trust you will permit me to address to you a few lines of hearty congratulation upon the publication of your able and extremely valuable article on the White Slave traffic, which I have just finished reading in this month's issue of McClure's Magazine.

My satisfaction in reading this article is that of a person who for years has thought along the same lines which your article follows, and who, for the past two years, has been closely engaged in certain phases of rescue work.

Your view of the whole subject is practically the same as that which I have been led to adopt, but of course your knowledge of its details are immeasurably greater than my own. I have long felt its great importance, and I have hoped that the time was coming when this question would receive the serious kind of treatment which you have accorded it, and that the new ideas might find a leader of adequate ability and prominence of position, so that thousands of persons who now brush the whole question aside -- either from a sense of helplessness to do anything in regard to it, or from mistaken feelings of delicacy, -- may be aroused to take hold of the matter.

When I read your article, I had that kind of deep satisfaction come over me which one long interested in a great question, somewhat familiar with its details but incapable of doing much to [page 2] help it forward, feels with the coming upon the scenes of a real champion. I am very much mistaken indeed if your article does not produce a deep and salutary impression upon thinking people. If so, we are approaching the time when something effective will be done toward the demolition of an institution as old and as bad as human slavery. Precisely the same thought which you express has often occurred as an encouragement to me in thinking upon this topic -- human slavery, as old as the world, was supposed, until a century ago, to be a permanent institution; but it fell and is virtually extinct today. Why may we not hope that the social Evil, in its commercial form at least, is destined to a similar extinction under the well-planned, persistent attacks of thinkers and workers in the modern world?

I have long felt that the necessary preface to any real forward movement -- just as in the case of slavery -- was to be found in a frank, full discussion of all the essential facts in the question by honest, intelligent men and women. We have not reached that point yet, but it seems to me that we are rapidly coming to it, and that your article, marked equally by delicacy and frankness, shows just how such discussions should be conducted, and will have a tremendous influence in promoting the same.

With sincere gratitude to you for rendering a great public service, I remain,

Welsh praises Addams' article on white slavery in McClure's Magazine and hopes it will start a discussion on the topic.