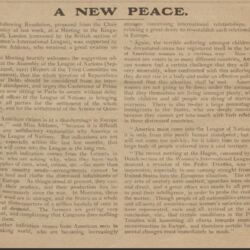 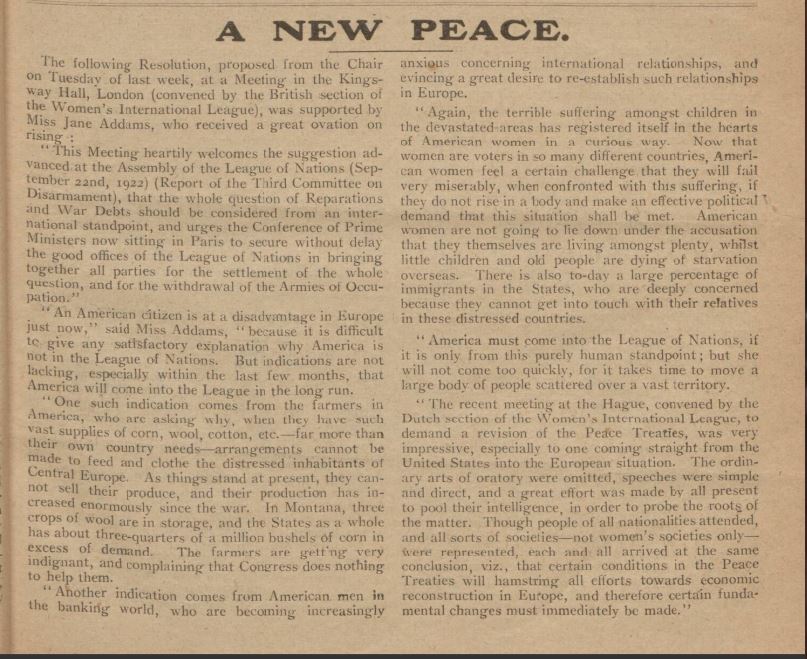 The following Resolution, proposed from the Chair on Tuesday of last week, at a Meeting in the Kingsway Hall, London (convened by the British section of the Women's International League), was supported by Miss Jane Addams, who received a great ovation on rising:

"This Meeting heartily welcomes the suggestion advanced at the Assembly of the League of Nations (September 22nd, 1922) (Report of the Third Committee on Disarmament), that the whole question of Reparations and War Debts should be considered from an international standpoint, and urges the Conference of Prime Ministers now sitting in Paris to secure without delay the good offices of the League of Nations in bringing together all parties for the settlement of the whole question, and for the withdrawal of the Armies of Occupation."

"An American citizen is at a disadvantage in Europe just now," said Miss Addams, "because it is difficult to give any satisfactory explanation why America is not in the League of Nations. But indications are not lacking, especially within the last few months, that America will come into the League in the long run.

"One such indication comes from farmers in America, who are asking why, when they have such vast supplies of corn, wool, cotton, etc. -- far more than their own country needs -- arrangements cannot be made to feed and clothe the distressed inhabitants of Central Europe. As things stand at present, they cannot sell their produce, and their production has increased enormously since the war. In Montana, three crops of wool are in storage, and the States as a whole has about three-quarters of a million bushels of corn in excess of demand. The farmers are getting very indignant, and complaining that Congress does nothing to help them.

"Another indication comes from American men in the banking world, who are becoming increasingly anxious concerning international relationships, and evincing a great desire to [reestablish] such relationships in Europe.

"Again the terrible suffering amongst children in the devastated areas has registered itself in the hearts of American women in a curious way. Now that women are voters in so many different countries, American women feel a certain challenge that they will fail very miserably, when confronted with this suffering, if they do not rise in a body and make an effective political demand that this situation shall be met. American women are not going to lie down under the accusation that they themselves are living amongst plenty, whilst little children and old people are dying of starvation overseas. There is also [today] a large percentage of immigrants in the States, who are deeply concerned because they cannot get into touch with their relatives in these distressed countries.

"America must come into the League of Nations, if it is only from this purely human standpoint; but she will not come too quickly, for it takes time to move a large body of people scattered over a vast territory.

"The recent meeting at The Hague, convened by the Dutch section of the Women's International League, to demand a revision of the Peace Treaties, was very impressive, especially to one coming straight from the United States into the European situation. The ordinary arts of oratory were omitted, speeches were simple and direct, and a great effort was made by all present to pool their intelligence, in order to probe the roots of the matter. Though people of all nationalities attended, and all sorts of societies -- not women's societies only -- were represented, each and all arrived at the same conclusion, viz., that certain conditions in the Peace Treaties will hamstring all efforts towards economic reconstruction in Europe, and therefore certain fundamental changes must immediately be made."

Addams addresses a peace meeting and argues that in order for Europe to recover economically, the peace treaty must be revised; she also argues that the United States should and will join the League of Nations.