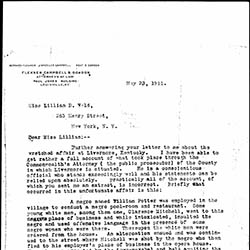 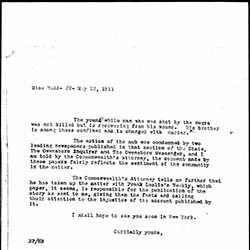 Further answering your letter to me about the wretched affair at Livermore, Kentucky. I have been able to get rather a full account of what took place through the Commonwealth's Attorney (the public prosecutor) of the County in which Livermore is situated. He is a conscientious official who stands exceedingly well and his statements can be relied upon absolutely. Practically all of the account, of which you sent me an extract, is incorrect. Briefly what occurred in this unfortunate affair is this:

A negro named William Potter was employed in the village to conduct a negro pool-room and restaurant. Some young white men, among them one, Clarence Mitchell, went to this negro's place of business and while intoxicated, insulted the negro and used offensive language in the presence of some negro women who were there. Thereupon the white men were ordered from the house. An altercation ensued and was continued to the street where Mitchell was shot by the negro who then fled to his employer's place of business in the opera house. There he was arrested by the town-marshal and held awaiting the arrival of the sheriff of the county. While being so held, a mob of some 20 or 30 men, some of them intoxicated, surrounded the building, broke into it and shot the negro. In an effort to secrete the prisoner, the marshal took him to the rear of the building and back into a dressing room on the stage. It was shortly after night-fall and there were no lights in the building, except a lamp brought in by a member of the mob. The curtain in front of the stage was not raised and some three or four members of the mob saw the negro at the time he was killed.

In the little community itself, there is absolutely no sympathy with the mob or [illegible] its conduct. As an evidence of this, the grand jury of the county, on May 8th, returned indictments against 18 men charged with complicity in the affair. These 18 men have been arrested, ten of them are still in jail and 8 have been released on bond. As indicating the attitude of the Commonwealth's Attorney, I quote from a paragraph of his letter to me:

"There is small doubt that every man in this number who participated in this homicide will be convicted by a jury and punished for his crime." [page 2]

The young white man who was shot by the negro was not killed but is recovering from his wound. His brother is among those confined and is charged with murder.

The action of the mob was condemned by two leading newspapers published in that section of the State, The Owensboro Inquirer and The Owensboro Messenger, and I am told by the Commonwealth's attorney, the comment made by these papers fairly reflects the sentiment of the community in the matter.

The Commonwealth's Attorney tells me further that he has taken up the matter with Frank Leslie's Weekly, which paper, it seems, is responsible for the publication of the story as sent to me, giving them the facts and calling their attention to the injustice of the account published by it.

I shall hope to see you soon in New York.
Cordially yours, 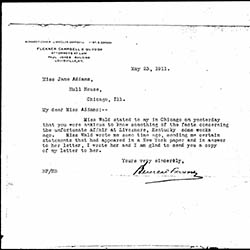 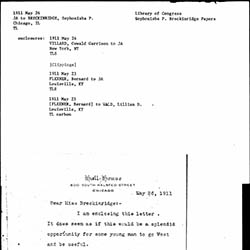 Flexner describes a lynching in Livermore, Kentucky and the reaction of the town and arrest of the participants.