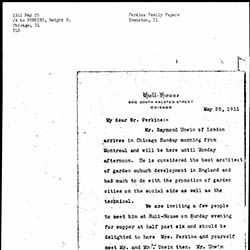 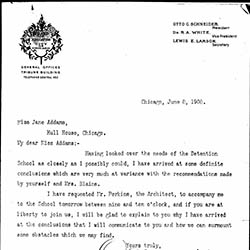 Dwight H. Perkins was an architect and planner. Instead of attending high school, Perkins worked at the Chicago Stockyards and the architectural firm Wheelock & Clay, and in 1885 he started to study architecture at Massachusetts Institute of Technology. He studied for two years and was invited to work as an instructor for his third year. In 1889 he began to work at Burnham & Root, and in 1894 he formed his own firm. Perkins was also a member of "The Eighteen," a group of architects that included Lawrence Buck and Frank Lloyd Wright. In 1905 he was Chief Architect for the Chicago Board of Education, but in 1910 he was accused of incompetence, inefficiency, and insubordination, though the real reason he was fired was that he refused to follow the orders of the corrupt members of the Board of Education. He owned many firms of his own with other architects afterward.

Perkins married Lucy Fitch in 1891. Perkins died in 1941 from a cerebral hemorrhage.