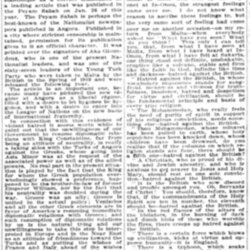 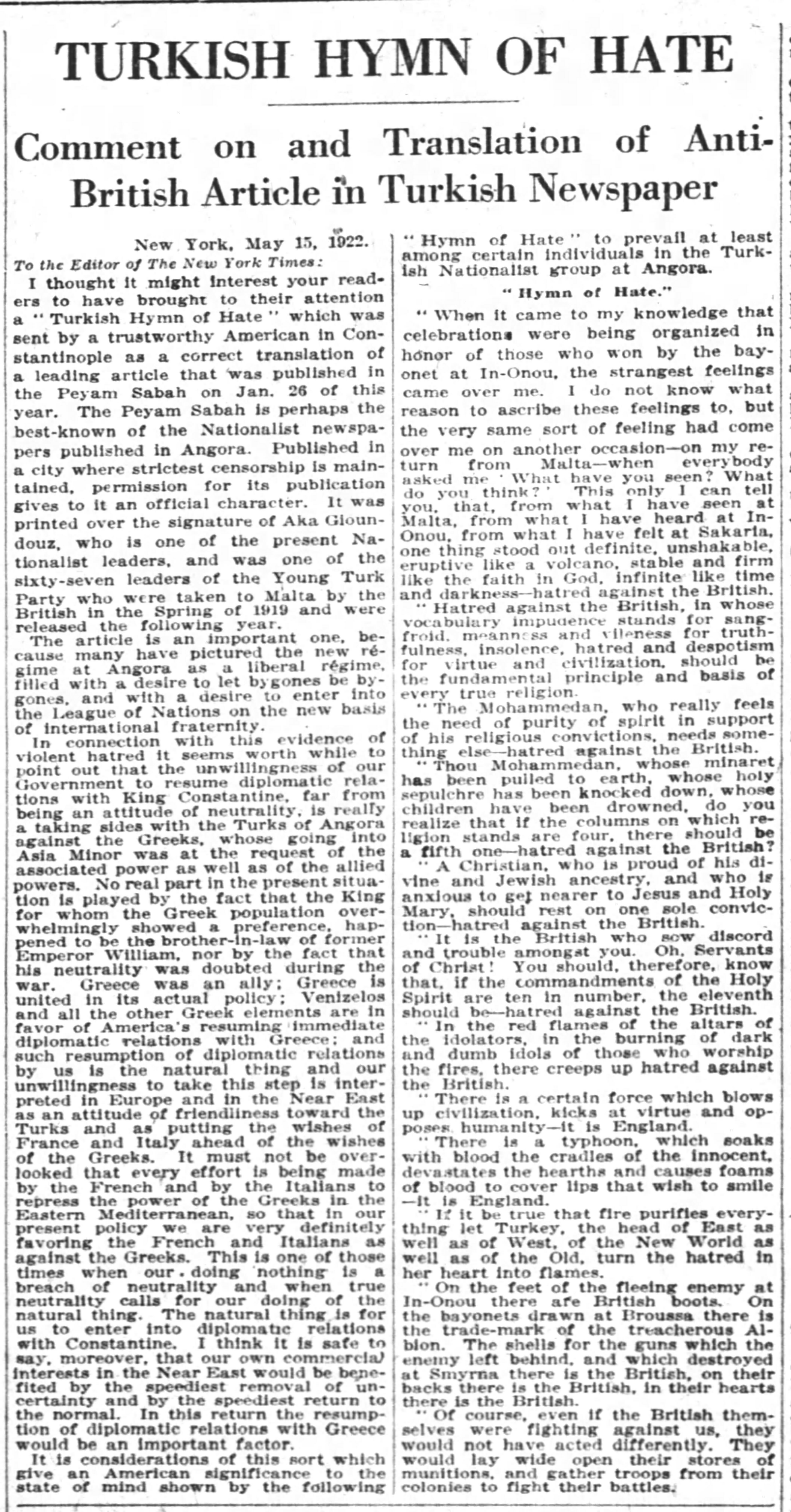 Comment on and Translation of Anti-British Article in Turkish Newspaper

I thought it might interest your readers to have brought to their attention a "Turkish Hymn of Hate" which was sent by a trustworthy American in Constantinople as a correct translation of a leading article that was published in the Peyam Sabah on Jan. 26 of this year. The Peyam Sabah is perhaps the best-known of the Nationalist newspapers published in Angora. Published in a city where strictest censorship is maintained, permission for its publication gives to it an official character. It was printed over the signature of Aka [Giountouz], who is one of the present Nationalist leaders, and was one of the sixty-seven leaders of the Young Turk Party who were taken to Malta by the British in the Spring of 1919 and were released the following year.

The article is an important one, because many have pictured the new regime at Angora as a liberal regime, filled with a desire to let bygones be bygones, and with a desire to enter into the League of Nations on the new basis of international fraternity.

In connection with this evidence of violent hatred it seems worth while to point out that the unwillingness of our Government to resume diplomatic relations with King Constantine, far from being an attitude of neutrality, is really a taking sides with the Turks of Angora against the Greeks, whose going into Asia Minor was at the request of the associated power as well as of the allied powers. No real part in the present situation is played by the fact that the King for whom the Greek population overwhelmingly showed a preference, happened to be the brother-in-law of former Emperor William, nor by the fact that his neutrality was doubted during the war. Greece was an ally; Greece is united in its actual policy; Venizelos and all the other Greek elements are in favor of America's resuming immediate diplomatic relations with Greece; and such resumption of diplomatic relations by us is the natural thing and our unwillingness to take this step is interpreted in Europe and in the Near East as an attitude of friendliness toward the Turks and as putting the wishes of France and Italy ahead of the wishes of the Greeks. It must not be overlooked that every effort is being made by the French and by the Italians to repress the power of the Greeks in the Eastern Mediterranean, so that in our present policy we are very definitely favoring the French and Italians as against the Greeks. This is one of those times when our doing nothing is a breach of neutrality and when true neutrality calls for our doing of the natural thing. The natural thing is for us to enter into diplomatic relations with Constantine. I think it is safe to say, moreover, that our own commercial interests in the Near East would be benefited by the speediest removal of uncertainty and by the speediest return to the normal. In this return the resumption of diplomatic relations with Greece would be an important factor.

It is considerations of this sort which give an American significance to the state of mind shown by the following "Hymn of Hate" to prevail at least among certain individuals in the Turkish National group in Angora.

"When it came to my knowledge that celebrations were being organized in honor of those who won by the bayonet at In-Onou, the strangest feelings came over me. I do not know what reason to ascribe these feelings to, but the very same sort of feeling had come over me on another occasion -- on my return from Malta -- when everybody asked me 'What have you seen? What do you think?' This only I can tell you, that, from what I have seen at Malta, from what I have heard at In-Onou, from what I have felt at Sakaria, one thing stood out definite, unshakable, eruptive like a volcano, stable and firm like the faith in God, infinite like time and darkness -- hatred against the British.

"Hatred against the British, in whose vocabulary impudence stands for sangfroid, meanness and vileness for truthfulness, insolence, hatred and despotism for virtue and civilization, should be the fundamental principle and basis of every true religion.

"The Mohammedan, who really feels the need of purity of spirit in support of his religious convictions, needs something else -- hatred against the British.

"Thou Mohammedan, whose minaret has been pulled to earth, whose holy [sepulcher] has been knocked down, whose children have been drowned, do you realize that if the columns on which religion stands are four, there should be a fifth one -- hatred against the British.

"A Christian, who is proud of his divine and Jewish ancestry, and who is anxious to get nearer to Jesus and Holy Mary, should rest on one sole conviction -- hatred against the British.

"It is the British who sow discord and trouble amongst you. Oh, Servants of Christ! You should, therefore, know that, if the commandments of the Holy Spirit are ten in number, the eleventh should be -- hatred against the British.

"In the red flames of the altars of the [idolaters], in the burning of dark and dumb idols of those who worship the fires, there creeps up hatred against the British.

"There is a certain force which blows up civilization, kicks at virtue and opposes humanity -- it is England.

"There is a typhoon, which soaks with blood the cradles of the innocent, devastates the hearths and causes foams of blood to cover lips that wish to smile -- it is England.

"If it be true that fire purifies everything let Turkey, the head of East as well as of West, of the New World as well as of the Old, turn the hatred in her heart into flames.

"Of course, even if the British themselves were fighting against us, they would not have acted differently. They would lay wide open their stores of munitions, and gather troops from their colonies to fight their battles."

A letter to the editor that describes the anti-British content of the "Hymn of Hate," recently published in Peyam Sabah in Angora.