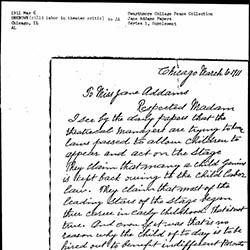 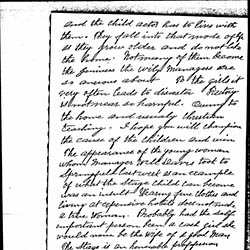 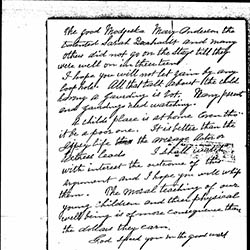 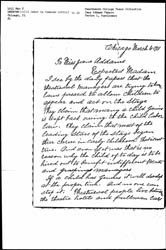 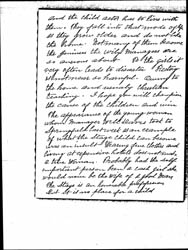 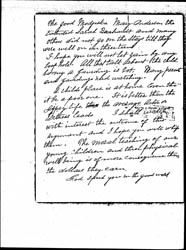 I see by the daily papers that the theatrical managers are trying to have laws passed to allow children to appear and act on the Stage. They claim that many a child genius is kept back owing to the child labor law. They claim that most of the leading stars of the stage began [their] career in early childhood. That is not true. And even if it was that is no reason why the child of today is to be hired out to benefit indifferent parents and grasping managers.

If a child has genius it will develop at the proper time. And no one can stop it. [Theatrical] people live between the [theater] hotels and pullman cars [page 2] and the child actor has to live with them. They fall into that mode of life as they grow older and do not like the home. Not many of them become the geniuses the wily managers are so anxious about. To the girls it very often leads to disaster. Factory is not near so harmful. Owing to the home and usually Christian teaching. I hope you will champion the cause of the children and win. The appearance of the young woman whom manager Will Davis took to Springfield last week as an example of what the Stage Child can become was an insult. Wearing fine clothes and living at expensive hotels does not make a true woman. Probably had the self-important person been a cash girl she would now be the wife of a good man. The stage is an [honorable] profession But it is no place for a child. [page 3] The good Modjeska Mary Anderson the talented Sarah [Bernhardt] and many others did not go on the Stage till they were well on in [their] teens.

I hope you will not let gain by any loophole. All that talk about the child having a [guardian] is rot. Many parents and [guardians] need watching.

A child's place is at home Even [though] it be a poor one. It is better than the [Gypsy] life the average Actor or Actress leads. I shall watch with interest the outcome of this argument and I hope you will whip them. The moral teaching of our young children and [their] physical well being is of more consequence than the dollars they earn.

God speed you in the good work. 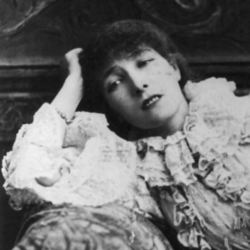 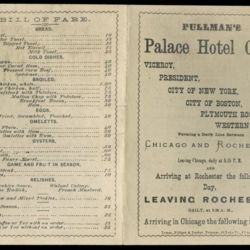 An unknown correspondent writes Addams in solidarity against an effort to exclude child actors from the Illinois Child Labor Law.