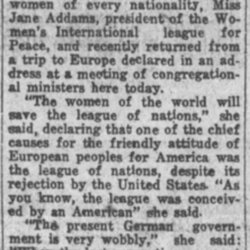 Women Will Save League of Nations Jane Addams Says

Chicago, Oct. 31, -- (By Associated Press) -- Future wars will be averted through the organization of women of every nationality, Miss Jane Addams, president of the Women's International League for Peace, and recently returned from a trip to Europe declared in an address at a meeting of congregational ministers here today.

"The present German government is very wobbly," she said. "When the last reparation [payment] was made to France, that government was compelled to loan Germany one-fourth of the total payment.

"There are two distinct movements through Europe. One is [anti]-militaristic and the other pro-militaristic. Militarism is making a strong effort to maintain its former foothold." 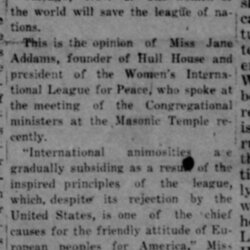 Addams argues that women can organize to prevent wars.