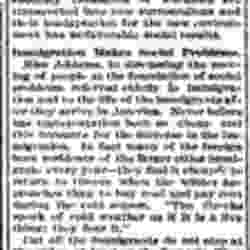 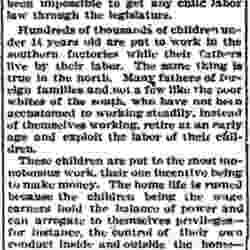 Previous to the appearance of "Little Sunshine" and Miss Prouty on the platform, Miss Jane Addams of Hull House had made an eloquent address, touching principally the conditions of child labor and of the immigrant in the larger cities of America. Miss Addams is too well known throughout the United States and especially in Rockford, where she once attended college, to need an introduction. Her work at Hull House has made her name famous in [every] part of the world. She is one of the foremost women on the lecture platform as well as the pioneer in settlement work in the United States.

Her keen insight into the causes of social conditions has made her a prime mover into the solving of the problems met in the slums of the cities. Yesterday she brought to the attention of her hearers two conditions which she said were at the foundation of many of the social problems and with this introduction went on to discuss one of the main problems, that of child labor, which has been brought about by those conditions.

In introduction Miss Addams limited her subject to the pressing social problems in America, saying that two of the greatest causes are the growth of the large cities and the moving about of people.

In olden days the cities grew slowly; now by the erection of large factories suddenly thousands of workmen are transported into new surroundings and their inadaptation for the new environment has unfavorable social results.

Miss Addams, in discussing the moving of people as the foundation of social problems, referred chiefly to immigration and to the life of the immigrants after they arrive in America. Never before has transportation been so cheap and this accounts for the increase in immigration. In fact many of the foreign born residents of larger cities immigrate every year -- they find it cheaper to return to Greece when the winter approaches than to buy coal and pay rent during the cold season. "The Greeks speak of cold weather as if it is a live thing; they fear it."

But all the immigrants do not stop at the cities, at least on the first trip. They go to the country and attempt to put into practice the same sort of life, the village life, to which they have been accustomed in the father land. The community to which they go says if you do not conform to our way of living you can't live with us and they go back to the tenements where they can most nearly duplicate the living conditions in the villages of Southern Europe where there is an oven common to the housewives of the whole village and all the other arrangements by which the villagers in Greece and Italy make their life the life almost of a large family. "You can't change the habits of generations in a minute," said Miss Addams.

"When the immigrant comes to this country," continued the speaker, "We are very prone not to find out in what places his services are most valuable but to let him work into his place by accident."

Later in her address, she cited an instance of an expert woodcarver, who came to this country and was put to work carrying pig iron in a foundry. He had been put out of his house by the landlord because he had beautified the home by carving the walls as is the custom in the old country. The landlord saw nothing to the carving except damage to house.

Miss Addams [illegible words] [attention] to the child [illegible words] [page 2] the state governments that refuse to pass laws benefiting the people. "Why, even in darkest Russia," she said, "there is a law that no child under 12 years old may be allowed to work in factories." In Alabama a similar law was passed with the greatest of difficulty and then after the age limit had been reduced to 10 years, and in South Carolina it has been impossible to get any child labor law through the legislature.

Hundreds of thousands of children under 14 years old are put to work in the southern factories while their fathers live by their labor. The same thing is true in the north. Many fathers of foreign families and not a few like the poor whites of the south, who have not been accustomed to working steadily, instead of themselves working, retire at an early age and exploit the labor of their children.

These children are put to the most monotonous work, their one incentive being to make money. The home life is ruined because the children being the wage earners hold the balance of power and can arrogate to themselves privileges -- for instance, the control of their own conduct inside and outside the home -- which they are not fitted to assume.

In conclusion Miss Addams presented the thought that "we don't see things that happen on the next street and even in our immediate neighborhood until something suddenly opens our eyes." A study of the conditions of life from a thorough sociological standpoint will result in effort and successful effort to alleviate strained sociological conditions.

Addams discusses the plight of child labor and immigration in a speech to the Chautauqua.

Only part of the article dealing with Addams's talk was included in this document.