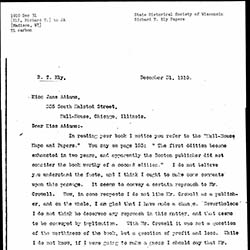 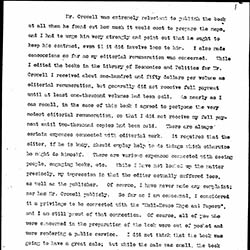 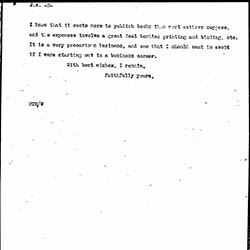 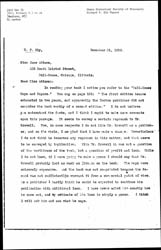 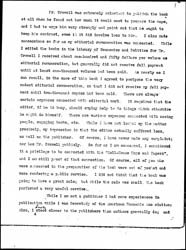 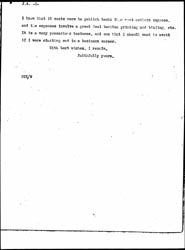 In reading your book I notice you refer to the "Hull-House Maps and Papers." You say on page 153: "The first edition became exhausted in two years, and apparently the Boston publisher did not consider the book worthy of a second edition." I do not believe you understand the facts, and I think I ought to make some comments upon this passage. It seems to convey a certain reproach to Mr. Crowell. Now, in some respects I do not like Mr. Crowell as a publisher, and on the whole, I am glad that I have made a change. Nevertheless I do not think he deserves any reproach in this matter, and that seems to be convoyed by implication. With Mr. Crowell it was not a question of the worthiness of the book, but a question of profit and loss. While I do not know, if I were going to make a guess I should say that Mr. Crowell probably lost as much as $500.00 on the book. The maps were extremely expensive. And the book was not re-printed because the demand was not sufficient to warrant it from a commercial point of view. As a publisher I hardly think he could be expected to continue his publication with additional loss. I have never asked him exactly how he came out, and my estimate of his loss is simply a guess. I think I will ask him and see what he says. [page 2]

Mr. Crowell was extremely reluctant to publish the book at all when he found out how much it would cost to prepare the maps, and I had to urge him very strongly and point out that he ought to keep his contract, even if it did involve loss to him. I also made concessions so far as my editorial renumeration was concerned. While I edited the books in the Library of Economies and Politics for Mr. Crowell I received about one-hundred and fifty dollars per volume as editorial renumeration, but generally did not receive full payment until at least one-thousand volumes had been sold. As nearly as I can recall, in the case of this book I agreed to postpone the very modest editorial renumeration, so that I did not receive my full payment until two-thousand copies had been sold. There are always certain expenses connected with editorial work. It requires that the editor, if he is busy, should employ help to do things which otherwise he might do himself. There are various expenses connected with seeing people, engaging books, etc. While I have not looked up the matter precisely, my impression is that the editor actually suffered loss, as well as the publisher. Of course, I have never made any complaint; nor has Mr. Crowell publicly. So far as I am concerned, I considered it a privilege to be connected with the "Hull-House Maps and Papers", and I am still proud of that connection. Of course, all of you who were concerned in the preparation of the book were out of  pocket and were rendering a public service. I did not think that the book was going to have a great sale; but while the sale was small, the book performed a very useful service.

While I am not a publisher I had some experiences in publication while I was Secretary of the American Economic Association: Also, I <have> stood closer to the publishers than authors generally do; and [page 3] I know that it costs more to publish books than most authors suppose, and the expenses involve a great deal besides printing and binding, etc. It is a very precarious business, and one that I should want to avoid if I were starting out in a business career.

With best wishes, I remain, 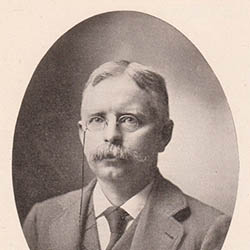 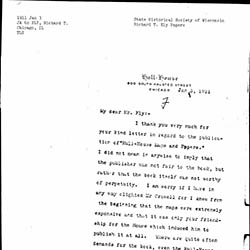