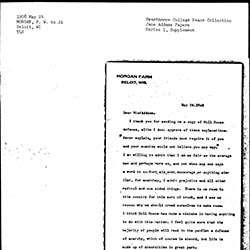 Frederick William Morgan was a farmer who owned a thousand acre farm named after him in Beloit, Wisconsin. Morgan was also part of the Morgan & Wright firm in Chicago, a tire and rubber company. Prior to forming Morgan & Wright in 1883, Morgan was the superintendent of the Chicago Rubber Works. Morgan and his business partner Rufus Wright were known for being fair bosses and treating their workers well and like family, and their company became one of the largest manufacturing companies in the world at the time, worth fifty-five million dollars in 1918.

Morgan married Mary A Morgan in 1880. They had four children together. Morgan died in 1921.