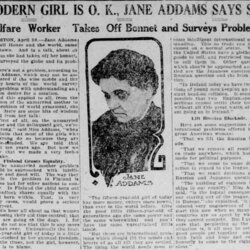 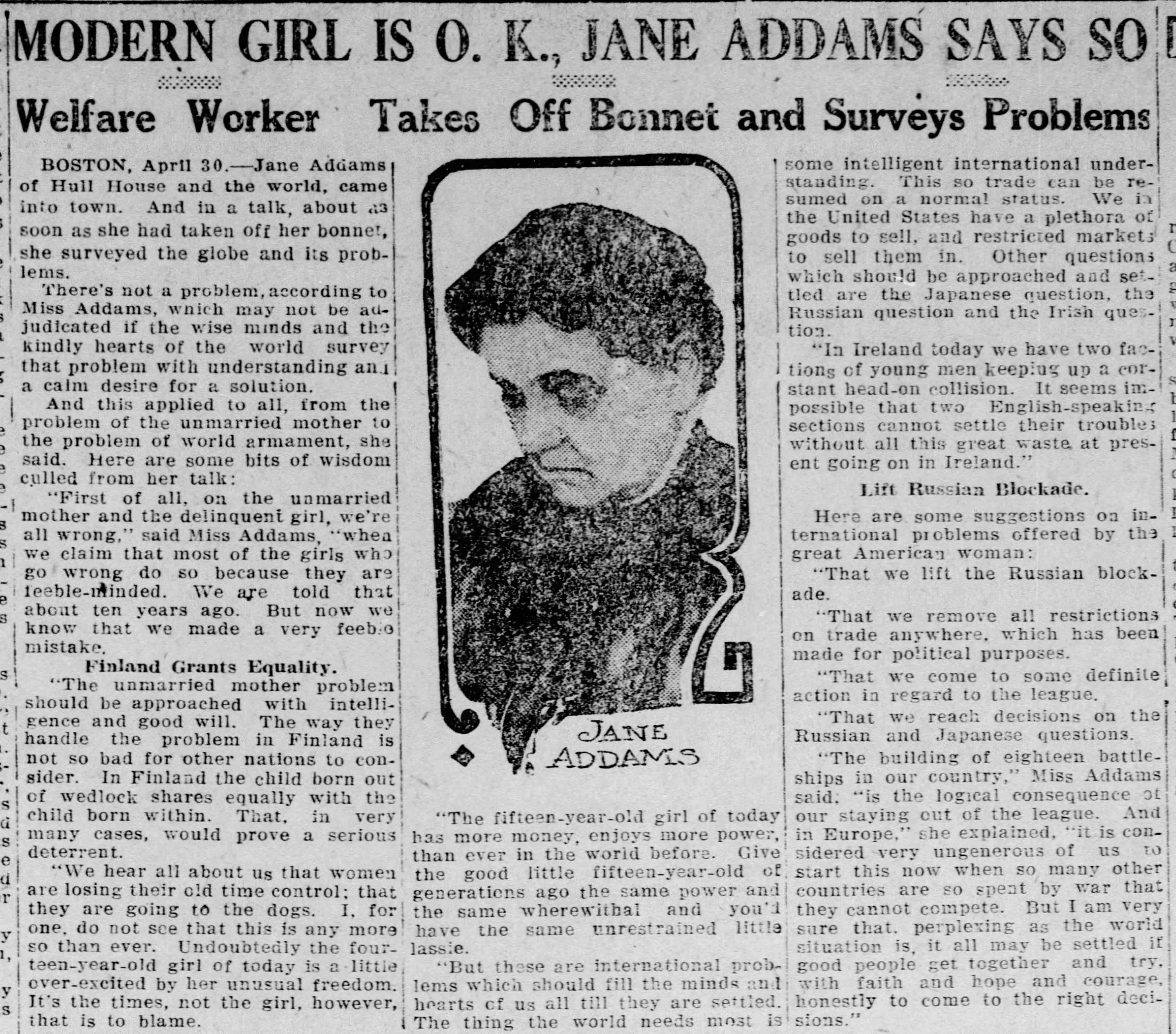 BOSTON, April 30. -- Jane Addams of Hull House and the world, came into town. And in a talk, about as soon as she had taken off her bonnet, she surveyed the globe and its problems.

There's not a problem, according to Miss Addams, which may not be adjudicated if the wise minds and the kindly hearts of the world survey that problem with understanding and a calm desire for a solution.

And this applied to all, from the problem of the unmarried mother to the problem of world armament, she said. Here are some bits of wisdom culled from her talk:

"First of all, on the unmarried mother and the delinquent girl, we're all wrong," said Miss Addams, "when we claim that most of the girls who go wrong do so because they are feeble-minded. We are told that about ten years ago. But now we know that we made a very feeble mistake."

"The unmarried mother problem should be approached with intelligence and good will. The way they handle the problem in Finland is not so bad for other nations to consider. In Finland the child born out of wedlock shares equally with the child born within. That, in very many cases, would prove a serious deterrent.

"We hear all about us that women are losing their old time control; that they are going to the dogs. I, for one, do not see that this is any more so than ever. Undoubtedly the fourteen-year-old girl of today is a little over-excited by her unusual freedom. It's the times, not the girl, however, that is to blame."

"The fifteen-year-old girl of today has more money, enjoys more power, than ever in the world before. Give the good little fifteen-year-old of generations ago the same power and the same wherewithal and you'd have the same unrestrained little lassie.

"But these are international problems which should fill the minds and hearts of us till they are settled. The thing the world needs most is some intelligent understanding. This so trade can be resumed on a normal status. We in the United States have a plethora of goods to sell, and restricted markets to sell them in. Other questions which should be approached and settled are the Japanese question, the Russian question and the Irish question.

"In Ireland today we have two factions of young men keeping up a constant head-on collision. It seems impossible that two English-speaking sections cannot settle their troubles without all this great waste at present going on in Ireland."

Here are some suggestions on international problems offered by the great American woman:

"That we lift the Russia blockade.

"That we remove all restrictions on trade anywhere, which has been made for political purposes.

"That we come to some definite action in regard to the league.

"That we reach decisions on the Russian and Japanese questions.

"The building of eighteen battleships in our country," Miss Addams said, "is the logical consequence of our staying out of the league. And in Europe," she explained, "it is considered very ungenerous of us to start this now when so many other countries are so spent by war that they cannot compete. But I am very sure that, perplexing as the world situation is, it all may be settled if good people get together and try, with faith and hope and courage, honestly to come to the right decisions."

Addams speaks in Boston about the way to solve the problem of unmarried mothers and delinquent girls and urges the lifting of the Russian blockade.