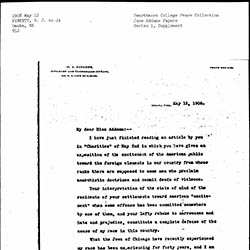 Harrison J. Pinkett was the first educated African-American lawyer to practice in Nebraska, joining the bar in 1907. Born in Virginia, Pinkett was one of fifteen children (though seven died young). He attended Howard University Law School and graduated in 1906, and then he studied for a time at Columbia University. While at Howard, he was a member of the Blackstone Club, secretary of the Bethel Literary and Historical Society, and a member of the Richards Debating Club. He was also the secretary of the first meeting of the Niagara Society in Washington, D.C. in 1905. In 1907, Pinkett was admitted to the Washington DC bar. He served as the manager and attorney for the Press Bureau and wrote for black papers. Pinkett moved to Omaha, Nebraska and began a law practice. He was known for his support for enforcement of laws on drug sales. During World War I, Pinkett enlisted in the army and served as a first lieutenant in the 92nd Infantry Division, and promoted the rights of black soldiers. Pinkett was also involved in the formation of Omaha's Colored Commercial Club, and very involved in the Omaha Branch of the NAACP.

Pinkett was married to Eva Madah Banks. After Eva's death in 1948, he then married a woman named Venus. Pinkett died in 1960.