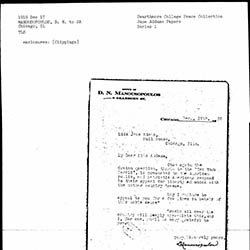 Demetrios Nickolas Manousopoulos was born in Greece, later emigrating to the United States in 1893. He first worked as a merchant, owning a fruit stand in Chicago. Manousopoulos then worked as an insurance salesman and Americanized his name to James Nicholas Mann.