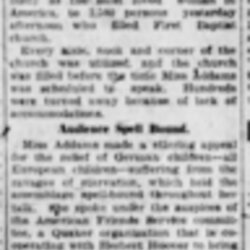 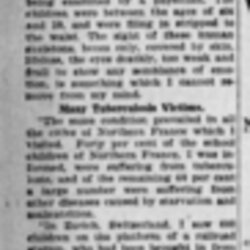 "Hunger, grim and terrible, has dehumanized the children of Germany and reduced them to the state of savage animals guided only by the elemental instincts of self preservation. If the war was fought, as we believe, to bring democracy and civilization to Germany, the very objects of the war will be lost if we in America, blessed with plenty, do not extend to the German children that human affection, sympathy and mercy founded on traditional American good will."

This message was conveyed by Miss Jane Addams of Hull house, Chicago, philanthropist, sociologist, author, settlement worker, suffrage worker and leading American delegate at the International Women's Peace congress at The Hague, whom Colonel Theodore Roosevelt referred to as "Chicago's most useful citizen," and regarded by many as the most loved woman in America, to 2,500 persons yesterday afternoon who filled First Baptist church.

Every aisle, nook and corner of the church was utilized, and the church was filled before the time Miss Addams was scheduled to speak. Hundreds were turned away because of lack of accommodations.

Miss Addams made a stirring appeal for the relief of German children -- all European children -- suffering from the ravages of starvation, which held the assemblage spell-bound throughout her talk. She spoke under the auspices of the American Friends Service committee, a Quaker organization that is [cooperating] with Herbert Hoover to bring succor to the children of our recent enemies. The committee has agreed to bear its own expenses both in America and in Germany and to furnish the necessary workers, while Mr. Hoover's organization will act as purchasing agent and transport all food, clothing and relief supplies from the United States to the point of distribution in Germany free of charge.

Hand-clapping greeted Miss Addams when she stepped upon the platform, but when the speaker, serious, the personification of kindness and mercy, began her message -- a message resulting from her visit to the European war-ridden countries -- an unusual silence fell over the audience.

"The largest death rate in Germany, a death rate such as that country has never before experienced, is among those between the ages of 13 and 20 years old -- the young people who soon will have to decide the delicate social and economic problems of the German people," Miss Addams said. "Goaded by hunger, reduced to the most terrible stages of starvation, these young folks have caused the greatest epidemic of crime imaginable. They will be utterly unable to cope with the problems that confront Germany, and democracy and civilization, which we said we were bringing to Germany, will be impossible of realization."

"Tuberculosis, brought about by hunger and malnutrition, is making its ravages among the German children [page 2]. Forms of tuberculosis have made their appearance there, which have never been known to medical science and is baffling physicians. Physicians believe that only supernutrition conducted for a period of three or four years will bring these children back to somewhat normal condition.

"The most critical time is the present when last year's crops are consumed and the new crop has not yet come in. The largest death rate in Germany occurred last spring. We must assume the responsibility of feeding these children until July. America has not borne her share of taking care of Europe's starving children as measured by the relief work done by Switzerland, Holland, Denmark and other neutral countries."

"The condition is similar in all European countries which were belligerents in the World war, and some of the countries of the Near East," Miss Addams said. "But there is at least a little satisfaction in the knowledge that something is being done -- far from sufficient -- to alleviate the suffering in the countries except Germany."

Miss Addams described her first impression of the famished children of Europe, those of Northern France, which brought home to the audience a vivid picture of these little mites.

"The first actually starved children that I saw was in Lille," Miss Addams said. "I visited a schoolroom where children suspected of tuberculosis were being examined by a physician. The children were between the ages of six and 10, and were filing in stripped to the waist. The sight of these human skeletons, bones only, covered by skin, lifeless, the eyes deathly, too weak and frail to show any semblance of emotion, is something which I cannot remove from my mind.

"In Zurich, Switzerland, I saw 600 children on the platform of a railroad station, who had been brought in from Austria. There was none of the bustle about these children that is always associated with normal children, no exhibition of pulsating child life. They were too weak and sickly to exhibit emotion -- some sank down on the rough board through mere exhaustion. It was a very depressing sight to see an eight or ten year old boy, unnatural and dull looking, being carried in the arms of a Swiss woman.

"These children were all taken into private Swiss homes and given all the food the Swiss people could spare. French, Italian, Austrian and other children were taken care of in Switzerland in this manner throughout the war. The same was true in Holland and Denmark. While the adults of those neutral countries were living on rations, depriving themselves of food, the children of the belligerent countries were given the best.

"America has not shown such a spirit of self-sacrifice. I recently attended a banquet served in Biltmore hotel, New York, at which $5 a plate was charged. After this $5 banquet pictures were shown of the starving children of Armenia, where the suffering has been as great, perhaps greater, than in any other country.

"America must bring relief to the starving children of all countries. There must be no nationality banned. The staving moan of a child represents only one thing, a call for aid which knows no bounds. America must give food to all hungry children, in France, Germany, Austria, [Romania], Italy, [Czechoslovakia], Armenia, Poland, Lithuania, Russia and all other countries where the children call."

Last night Miss Addams spoke in People's church, St. Paul, after which she returned to Chicago.

Addams makes the case for European relief to save starving children.