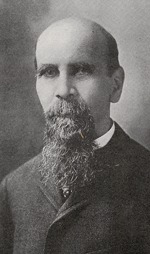 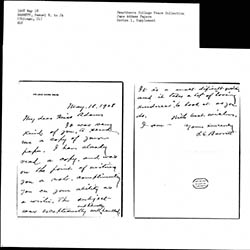 Samuel E. Barrett opened a roofing business in Chicago, which grew into a paving company after Barrett realized that Chicago was in need of better roads and sidewalks. Barrett experimented with the idea of using roofing tar in pavement, and the company grew into a national company with manufacturing plants in New York, New Jersey, Ohio, and Illinois. With this success, Barret became a philanthropist and was a frequent donor to Hull-House. Barrett was also a member of the Art Institute of Chicago, and he was a trustee of the Institute from 1897 to 1908.

Barrett was married to Alice Brush. They had four children together. Barett died in 1912.

Picture from Barrett Paving's website. Not sure if it is public domain