The World's Food Supply and the World's Politics, November 9, 1919 (excerpt) 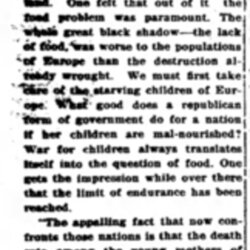 Miss Jane Addams spoke to a crowded house at the evening session on "The World's Food Supply and the World's Politics." Miss Addams recounted her experiences as a member of a Commission appointed for the purpose of investigating the food conditions in Europe. She said: "No matter what great problems were up before the Peace Conference at Paris, whether it was the question of Shantung, or the Jewish situation in Poland, or Palestine or Fiume, the one great question with the masses of the people of Europe was food. That stalks like a grim specter over the land. One felt that out of it the food problem was paramount. The whole great black shadow -- the lack of food, was worse to the populations of Europe than the destruction already wrought. We must first take care of the starving children of Europe. What good does a republican form of government do for a nation if her children are [malnourished]? War for children always translates itself into the question of food. One gets the impression while over there that the limit of endurance has been reached.

"The appalling fact that now confronts those nations is that the death rate among the young mothers of the nations is ascending in leaps. During the war it was the greatest among old people and children. The mothers denied themselves food that their children might live and now our neighbors across the waters are paying the penalty of losing these mothers."

"Europe is expecting us to give them help -- help which we alone of all nations can give. The children and mothers must have what is called 'super-feeding.'

"Another question confronting America is, that she herself must give great heed to the proper feeding of her own children."

Addams discusses the food situation in Europe as a grim specter over any attempts at peace. This speech was delivered as part of the Social Welfare Conference at the Elm Street Church in Chillicothe, MO.

This is an excerpt from a longer article.