Statement on the Disappearance of Jeanne DeKay, January 12, 1920 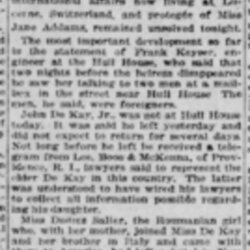 {SPECIAL [DISPATCH] TO THE HERALD.}

The most important development so far is the statement of Frank Keyser, engineer at the Hull House, who said that two nights before the heiress disappeared he saw her talking to two men at a mailbox in the street near Hull House. The men, he said, were foreigners.

John DeKay, Jr., was not at Hull House today. It was said he left yesterday and did not expect to return for several days. Not long before he left he received a telegram from Lee, Boos & McKenna, of Providence, R.I., lawyers said to represent the elder DeKay in this country. The latter was understood to have wired his lawyers to collect all information possible regarding his daughter.

Miss Dadiez Salter, the [Romanian] girl who, with her mother, joined Miss DeKay and her brother in Italy and came with them to America, had left a hotel in New York without leaving a forwarding address, according to word from the hotel. Miss Salter had come to America to sell some art collections. She and Miss DeKay became fast friends and when she learned that Miss DeKay had disappeared she came to Chicago to assist in the search. She remained two days and returned to New York, it is said.

John DeKay, Jr., said his sister had not been acquainted with Miss Salter before their meeting on the steamship, yet a cablegram from the elder DeKay spoke of a “[Romanian] lady,” which would indicate, detectives said, that the father was aware of the meeting.

Miss Addams would not accept the theory that Miss DeKay had been abducted by international crooks, who believed she had possession of the art collection Miss Salter was reported to have brought to America. She also declared her belief that enemies of the heiress’ father had not kidnapped the girl.

“Miss DeKay is not the victim of conspiring kidnappers nor the pawn of an international conspiracy,” said Miss Addams tonight. “She was just a plain little girl who has either wandered away while suffering from amnesia, or who has committed suicide while temporarily mentally unbalanced.” 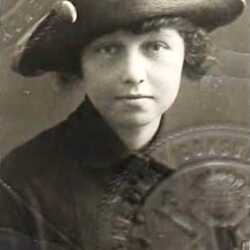 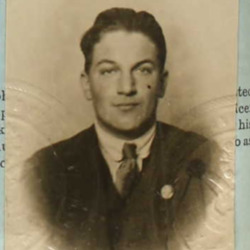 Newspaper story about the latest in the disappearance of Jeanne DeKay contains a short statement about the case by Addams.