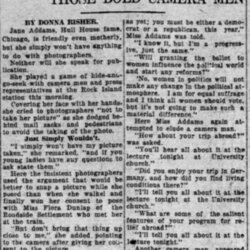 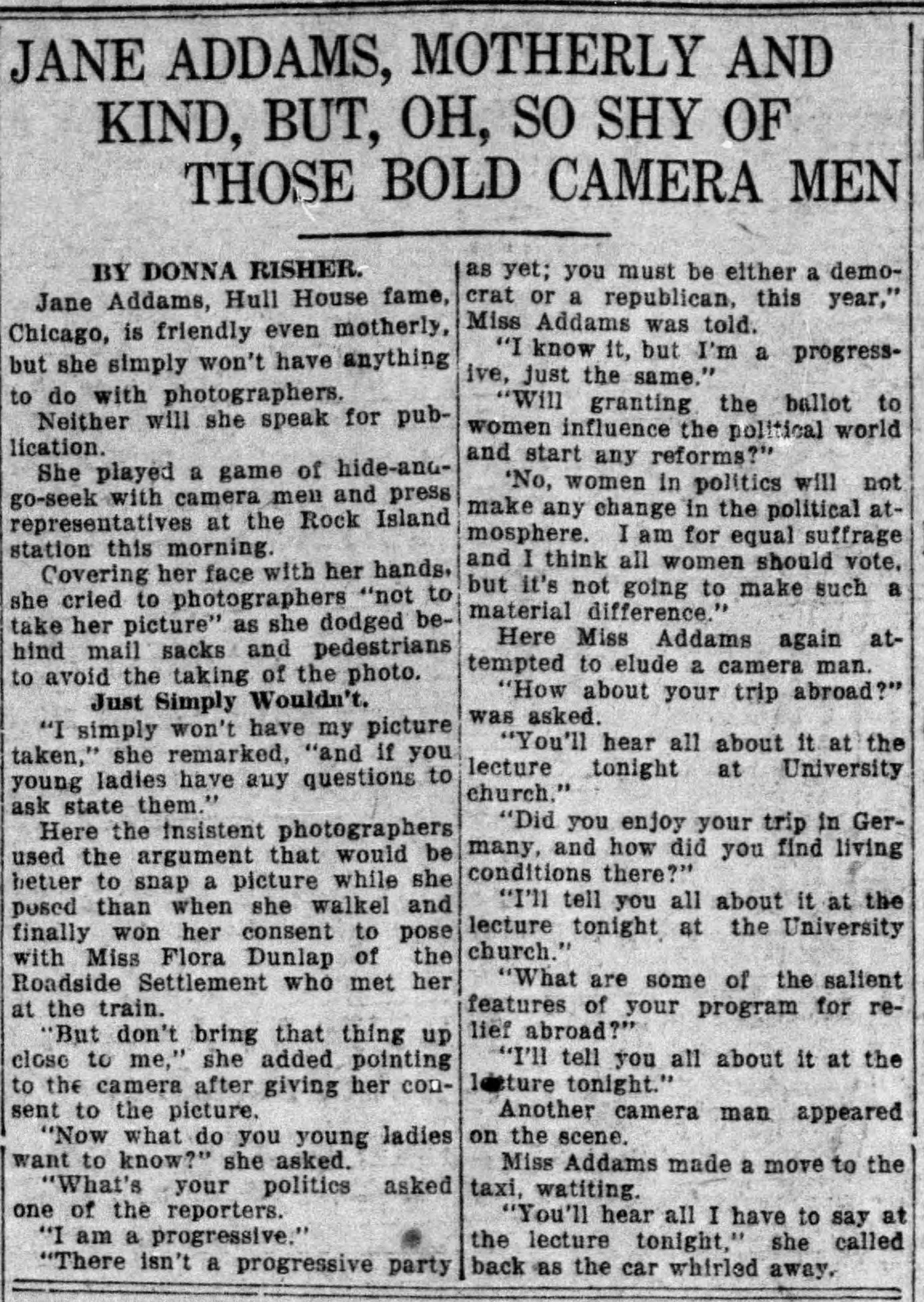 JANE ADDAMS, MOTHERLY AND KIND, BUT, OH, SO SHY OF THOSE BOLD CAMERA MEN

Jane Addams, Hull House fame, Chicago, is friendly even motherly, but she simply won't have anything to do with photographers.

Neither will she speak for publication.

She played a game of hide-and-go-seek with camera men and press representatives at the Rock Island station this morning.

Covering her face with her hands, she cried to photographers "not to take her picture" as she dodged behind mail sacks and pedestrians to avoid the taking of the photo.

"I simply won't have my picture taken," she remarked, "and if you young ladies have any questions to ask state them."

Here the insistent photographers used the argument that would be better to snap a picture while she posed than when she [walked] and finally won her consent to pose with Miss Flora Dunlop of the Roadside Settlement who met her at the train.

"But don't bring that thing up close to me," she added pointing to the camera after giving her consent to the picture.

"Now what do you young ladies want to know?" she asked.

"What's your politics" asked one of the reporters.

"I am a progressive."

"There isn't a progressive party as yet; you must be either a democrat or a republican this year," Miss Addams was told.

"I know it, but I'm a progressive, just the same."

"Will granting the ballot to women influence the political world and start any reforms?"

"No, women in politics will not make any change in the political atmosphere. I am for equal suffrage and I think all women should vote, but it's not going to make such a material difference."

"How about your trip abroad?" was asked.

"You'll hear all about it at the lecture tonight at University church."

"Did you enjoy your trip in Germany, and how did you find living conditions there?"

"I'll tell you all about it at the lecture tonight at the University church."

"What are some of the salient features of your program for relief abroad?"

"I'll tell you all about it at the lecture tonight."

Another camera man appeared on the scene.

Miss Addams made a move to the taxi, waiting.

"You'll hear all I have to say at the lecture tonight," she called back as the car whirled away.

Risher interviews Addams about her politics at the Rock Island train station.