Information for Friends of Our Dead, ca. 1919 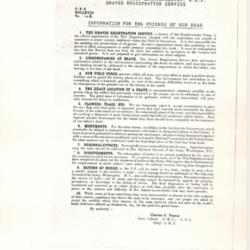 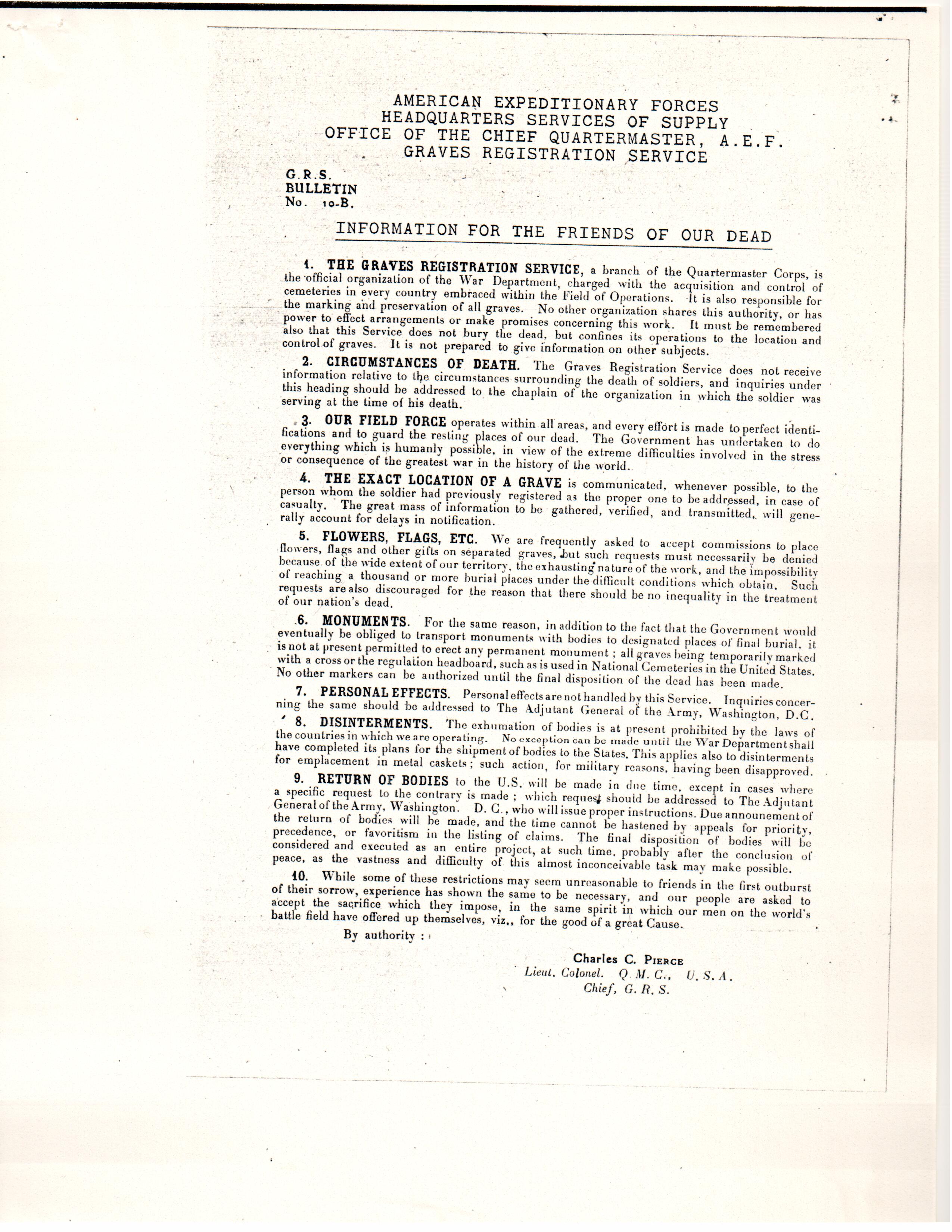 INFORMATION FOR THE FRIENDS OF OUR DEAD

1. THE GRAVES REGISTRATION SERVICE, a branch of the Quartermaster Corps, is the official organization of the War Department, charged with the acquisition and control of cemeteries in every country embraced within the Field of Operations. It is also responsible for the marking and preservation of all graves. No other organization shares this authority, or has power to effect arrangements or make promises concerning this work. It must be remembered also that this Service does not bury the dead, but confines its operations to the location and control of graves. It is not prepared to give information on other subjects.

2. CIRCUMSTANCES OF DEATH. The Graves Registration Service does not receive information relative to the circumstances surrounding the death of soldiers, and inquiries under this heading should be addressed to the chaplain of the organization in which the soldier was serving at the time of his death.

3. OUR FIELD FORCE operates within all areas, and every effort is made to perfect identifications and to guard the resting places of our dead. The Government has undertaken to do everything which is humanly possible, in view of the extreme difficulties involved in the stress or consequence of the greatest war in the history of the world.

4. THE EXACT LOCATION OF GRAVE is communicated, whenever possible, to the person whom the soldier had previously registered as the proper one to be addressed, in case of casualty. The great mass of information to be gathered, verified, and transmitted, will generally account for delays in notification.

5. FLOWERS, FLAGS, ETC. We are frequently asked to accept commissions to place flowers, flags and other gifts on separated graves, but such requests must necessarily be denied because of the wide extent of our territory, the exhausting nature of the work, and the impossibility of reaching a thousand or more burial places under the difficult conditions which obtain. Such requests are also discouraged for the reason that there should be no inequality in the treatment of our nation's dead.

6. MONUMENTS. For the same reason, in addition to the fact that the Government would eventually be obliged to transport monuments with bodies to designated places of final burial, it is not at present permitted to erect any permanent monument; all graves being temporarily marked with a cross or the regulation headboard, such as is used in National Cemeteries in the United States. No other markers can be authorized until the final disposition of the dead has been made.

7. PERSONAL EFFECTS. Personal effects are not handled by this Service. Inquiries concerning the same should be addressed to The Adjutant General of the Army, Washington, D.C.

8. DISINTERMENTS. The exhumation of bodies is at present prohibited by the laws of the countries in which we are operating. No exception can be made until the War Department shall have completed its plans for the shipment of bodies to the States. This applies also to disinterments for emplacement in metal caskets; such action, for military reasons, having been disapproved.

9. RETURN OF BODIES to the U.S. will be made in due time, except in cases where a specific request to the contrary is made; which request should be addressed to The Adjutant General of the Army, Washington, D.C., who will issue proper instructions. Due [announcement] of the return of bodies will be made, and the time cannot be hastened by appeals for priority, precedence, or favoritism in the listing of claims. The final disposition of bodies will be considered and executed as an entire project, at such time, probably after the conclusion of peace, as the vastness and difficulty of this almost inconceivable task may make possible.

10. While some of these restrictions may seem unreasonable to friends in the first outburst of their sorrow, experience has shown the same to be necessary, and our people are asked to accept the sacrifice which they impose, in the same spirit in which our men on the world's battle field have offered up themselves, viz., for the good of a great Cause. 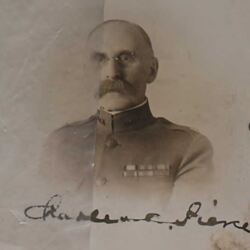 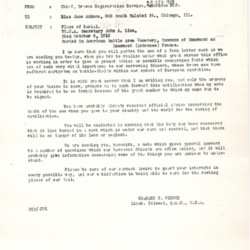 Pierce provides information for those who lost family and friends in World War I.