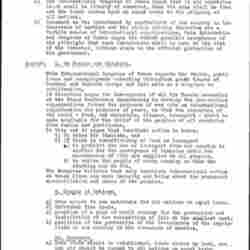 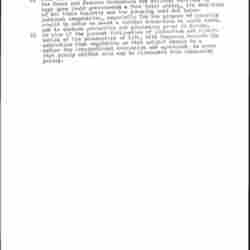 Among Resolutions on Economic policy we have passed the following:

a) The International Congress of Women urges that in all countries there shall be liberty of commerce, that the seas shall be free and the trade routes open on equal terms to the shipping of all nations.

b) Inasmuch as the investment by capitalists of one country in the resources of another and the claims arising therefrom are a fertile source of international complications, this International Congress of Women urges the widest possible acceptance of the principle that such investments shall be made at the risk of the investor, without claim to the official protection of his government.

Zurich: 1. On Famine and Blockade.

This International Congress of Women regard the famine, pestilence and unemployment extending throughout great tracts of Central and Eastern Europe and into Asia as a disgrace to [civilization].

It therefore urges the Governments of all the Powers assembled at the Peace Conference immediately to develop the interallied [organizations] formed for purposes war into an international [organization] for purposes of peace, so that the resources of the world -- food, raw materials, finance, transport -- shall be made available for the relief of the peoples of all countries from famine and pestilence.

To this end it urges that immediate action be taken:

1) To raise the blockade, and

2) If there is insufficiency of food or transport

a) to prohibit the use of transport from one country to another for the conveyance of luxuries until the necessaries of life are supplied to all peoples.

b) to ration the people of every country so that the starving may be fed.

The Congress believes that only immediate international action on these lines can save humanity and bring about the permanent reconciliation and union of the peoples.

g) Adoption of a plan of world economy for the production and distribution of the necessities of life at the smallest cost.

h) Abolition of the protection of the investments of the capitalists of one country in the resources of another.

a) Free trade should be established; trade routes by land, sea and air should be opened to all nations on equal terms.

b) Concessions in undeveloped countries should be under the control of the League of Nations, and withdrawn if abused; the right to protect investments of capitalists of one country in the resources of another should be abolished.

c) Production and Distribution. Such methods of production, trade and transit should be adopted as should insure a just distribution of the necessities of life at the least cost. [page 2]

1) This Third Congress of the Women's International League for Peace and Freedom recommends the National Sections to urge upon their governments a free trade policy, the abolition of all trade boycotts and the pressing need for international cooperation, especially for the purpose of creating credit in order to avert a further [breakdown] in world trade, and to restore productive and purchasing power in Europe.

3) In view of the present dislocation of production and distribution of necessities of life, this Congress records its conviction that regulation on this subject should be a matter for international discussion and agreement, in order that purely selfish aims may be eliminated from commercial policy. 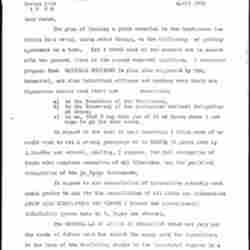 Balch lists the resolutions and economic policies passed by the WILPF.