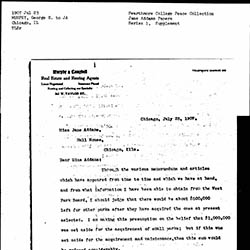 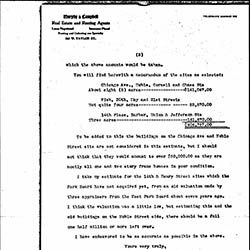 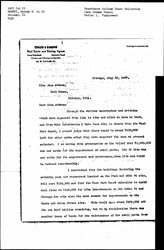 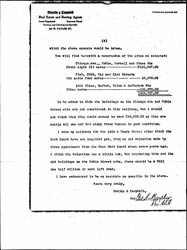 Through the various memorandums and articles which have appeared from time to time and which we have at hand, and from what information I have been able to obtain from the West Park Board, I should judge that there would be about $500,000 left for other parks after they have acquired the ones at present selected. I am making this presumption on the belief that $1,000,000 was set aside for the acquirement of small parks; but if this was set aside for the acquirement and maintenance, then this sum would be reduced considerably.

I understand that the buildings including the swimming pool and restaurant located on the Fisk and 20th St site, will cost $125,000 and that the West Park Board calculate to spend very close to $100,000 for like improvements on the Noble St and Chicago Ave site also the same amount for improvements on the Henry and Union Street site. This would mean about $325,000 off the one half million remaining, but to my recollection there was another issue of bonds for the maintenance of the small parks from [page 2] which the above amounts would be taken.

You will find herewith a memorandum of the sites as selected:

To be added to this the buildings on the Chicago Ave and Noble Street site are not considered in this estimate, but I should not think that they would amount to over $50,000.00 as they are mostly all one and two story frame houses in poor condition.

I take my estimate for the 14th & Henry Street sites which the Park Board have not acquired yet, from an old valuation made by three appraisers from the West Park Board about seven years ago. I think the valuation was a little low, but estimating this and the old buildings on the Noble Street side, there should be a full one half million or more left over.

I have endeavored to be as accurate as possible in the above.

Murphy sends Addams estimates for the prices of real estate in Chicago for the West Park Board.