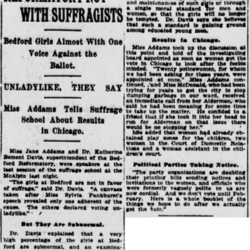 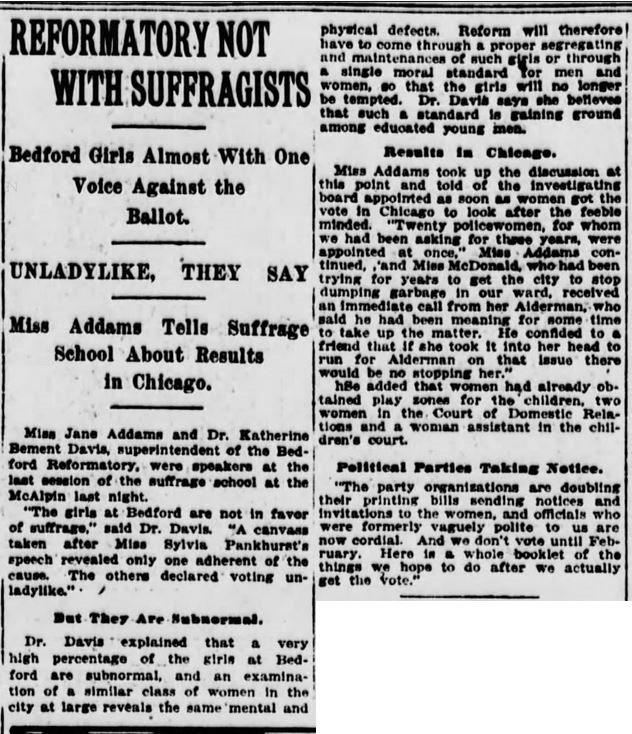 REFORMATORY NOT WITH SUFFRAGISTS

Bedford Girls Almost With One Voice Against the Ballot.

Miss Jane Addams and Dr. [Katharine] Bement Davis, superintendent of the Bedford Reformatory, were speakers at the last session of the suffrage school at the McAlpin last night.

"The girls at Bedford are not in favor of suffrage," said Dr. Davis. "A canvass taken after Miss Sylvia Pankhurst's speech revealed only one adherent of the cause. The others declared voting unladylike."

But They Are Subnormal.

Dr. Davis explained that a very high percentage of the girls at Bedford are subnormal, and an examination of a similar class of women in the city at large reveals the same mental and physical defects. Reform will therefore have to come through a proper segregating and maintenance of such girls or through a single moral standard for men and women, so that the girls will no longer be tempted. Dr. Davis says she believes that such a standard is gaining ground among educated young men.

Miss Addams took up the discussion at this point and told of the investigating board appointed as soon as women got the vote in Chicago to look after the feeble minded. "Twenty policewomen, for whom we had been asking for three years, were appointed at once." Miss Addams continued, "and Miss [McDowell], who had been trying for years to get the city to stop dumping garbage in our ward, received an immediate call from her Alderman, who said he had been meaning for some time to take up the matter. He confided to a friend that if she took it into her head to run for Alderman on that issue there would be no stopping her."

She added that women had already obtained play zones for the children, two women in the Court of Domestic Relations and a woman assistant in the children's court.

"The party organizations are doubling their printing bills sending notices and invitations to the women, and officials who were formerly vaguely polite to us are now cordial. And we don't vote until February. Here is a whole booklet of the things we hope to do after we actually get the vote." 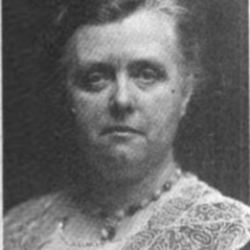 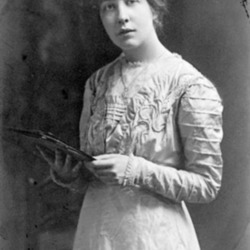 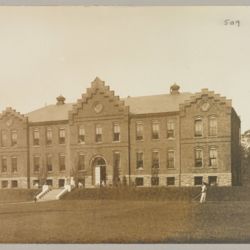 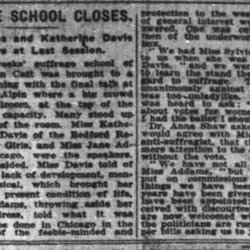 Addams discusses the impact that woman suffrage will have in Chicago.