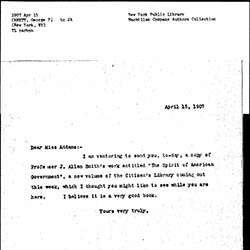 J. Allen Smith was a professor of economics and sociology at Marietta College from 1895 to 1897. He then became a political science professor at the University of Washington. Smith wrote "The Spirit of Government," which appeared in the Citizen's Library in 1907. In 1912 he wrote the book The Spirit of American Government - A Study of the Constitution: Its Origin, Influence and Relation to Democracy. From 1911 to 1920, Smith served as a graduate school Dean of the University of Washington.