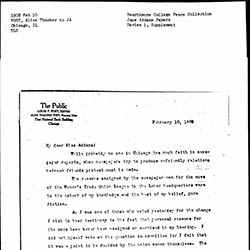 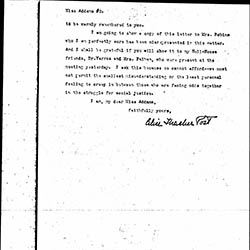 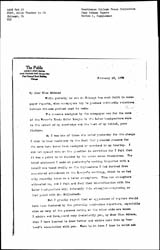 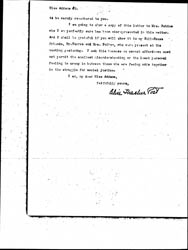 While probably no one in Chicago has much faith in newspaper reports, when newspapers try to produce unfriendly relations between friends protest must be made.

The reasons assigned by the newspaper men for the move of the Women's Trade Union League to the Labor headquarters were to the extent of my knowledge and the best of my belief, pure fiction.

As I was one of those who voted yesterday for the change I wish to bear testimony to the fact that personal reasons for the move have never been assigned or surmised in my hearing. I did not myself vote on the question in committee for I felt that it was a point to be decided by the union women themselves. The brief statement I made at yesterday's meeting (reported with a twist) was based wholly on the impressions I had derived from occasional attendance at the League's meetings, which to me had only recently taken on a labor atmosphere. This new atmosphere attracted me, and I felt and feel that identification with the Labor headquarters will intensify this atmosphere -- agreeing on that point with Mr. Mullenbach.

But I greatly regret that an appearance of rupture should have been fostered by the generally mendacious reporters, especially when so many of the persons voting on the other side are women I admire and love, -- and very insistently you, my dear Miss Addams, whom I have learned to know better and admire more from my husband's association with you. Were he in town I know he would ask [page 2] to be warmly remembered to you.

I am going to show a copy of this letter to Mrs. Robins who I am perfectly sure has been misrepresented in this matter. And I shall be grateful if you will show it to my Hull-House friends, Dr. Yarros and Mrs. Pelham, who were present at the meeting yesterday. I ask this because we cannot afford -- we much not permit the smallest misunderstanding or the least personal feeling to creep in between those who are facing odds together in the struggle for social justice.

I am, my dear Miss Addams,
faithfully yours, 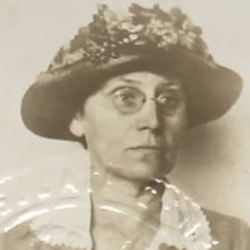 Post informs Addams that the newspaper coverage of the Women's Trade Union League's decision to move their meetings from Bowen Hall at Hull-House to the Chicago Federation of Labor Hall was inaccurate and designed to cause hard feelings.