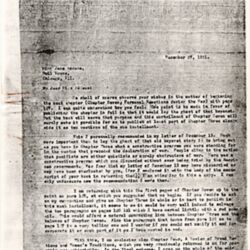 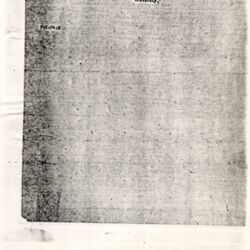 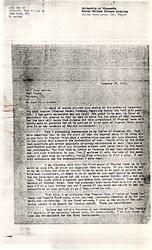 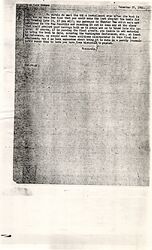 We shall of course observe your wishes in the matter of beginning the next chapter (Chapter Seven, Personal Reactions during the War) with page 127. I can quite understand how you feel. One point to be made in favor of publishing the chapter in full is that it would lay the ghost of that bayonet. But the book will serve that purpose and this curtailment of Chapter Seven will surely make it possible for us to publish at least part of Chapter Three alongside it as two sections of one installment.

This I personally recommended in my letter of December 13. Much more important than to lay the ghost of that old bayonet story is to bring out as you have in Chapter Three what a constructive program you were standing for in the months that preceded the declaration of war. People cling to the notion that pacifists are either quietists or merely obstructers of war. Here was a constructive program which was discarded without ever being tried by the American government. For fear that my letter of December 13 may have miscarried or may have been overlooked by you (for I enclosed it with the body of the manuscript of your book in returning that), I am attaching to this a copy. I can only underscore now the recommendation I made then.

I am returning with this the first pages of Chapter Seven up to the point on page 127, at which you suggested that we begin. If you decide to act on my suggestion and give us Chapter Three in whole or in part to publish in this next installment, it seems to me it would be very well indeed to salvage the two paragraphs on pages 120-121 which I have marked lightly with a red pencil. This would afford a natural connecting link between Chapter Three and the balance of Chapter Seven. Also the paragraph that turns from page 126 on to page 127 is a very telling one and I wonder if you could not modify it and incorporate it or such part of it as I have marked in red.

With this, I am enclosing also Chapter Four, A Review of Bread Relations and Women's Traditions, which you very graciously returned to me for possible use editorially. In the final outcome, I gave up the whole of the editorial column to an appeal for Russian relief. Thank you nonetheless.

We have set aside a fraction of our Development Fund of The Graphic for payment, at an extremely modest rate, for manuscripts. I am very happy to send you the enclosed for the first installment. [page 2]

We surely do want the third installment even after the book is out, and my hope has been that you could make the last chapter the basis for it, drawing into it, if you will, any passages in Chapter Ten which were not published in the New Republic and rounding it out in some way at the close that would project your message both as to peace and as to bread into the future. Of course, if in passing the final proofs, you decide to add material to bring the book to date, covering the Washington Conference, etc., at least by references, we should want these additions incorporated in this final installment; but I am less concerned about [bringing] it to date in a purely journalistic sense than to have you turn from historian to prophet. 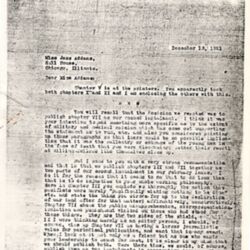 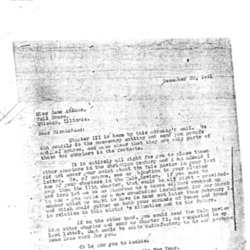 Kellogg updates Addams on publications plans for sections of Peace and Bread in Time of War.