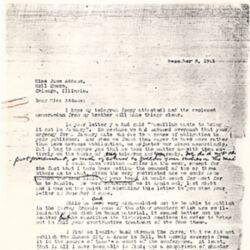 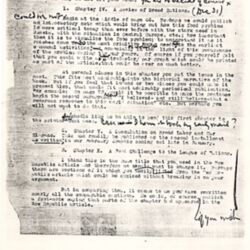 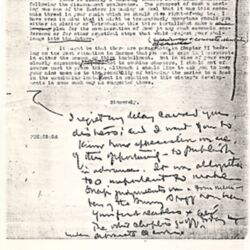 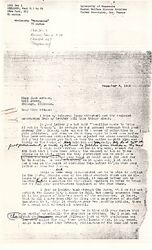 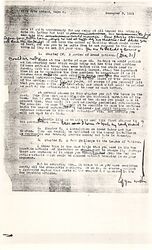 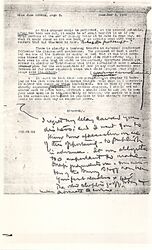 I hope my telegram (copy attached) and the enclosed memorandum from my brother will make things clear.

In your letter you said "Macmillan wants to bring it out in January”. So perhaps we had assumed overmuch that your urgency for a January date was due to a sense of obligation to your publisher. And when we found them eager to have more rather than less advance publication, we adjusted our plans accordingly. But I beg to assure you that we took the matter up with them entirely on the basis of ↑my↓ telegram and ↑your↓ reply. ↑We did not [request?] postponement, & wish of course to follow your wishes on the [matter.]↓

I would have written earlier in the week, except for the fact that I have been getting the counsel of two or three others as to what, given the very restricted use we could make of your book within the time limit, it would count for most for us to handle. We were conferring on it again only last night and I was on the point of dictating this letter to you when your letter of December 2 came.

While we were ↑are↓ very disappointed not to be able to publish in the Survey Graphic some of the other chapters which are so illuminating and rich in human material, it seemed better not to scatter ↑but↓ to sacrifice the historical sections in order to bring out in full your constructive treatment of the food theme.

I find on looking back through The Survey that we did not publish the Kansas City address in full, but merely excerpts from it in the course of Lane's account of the conference. At least, that is all I have been able to find; and a comparison of chapter ten shows that, while it overlaps your New Republic article, there is a great deal of original material.

Such a plan also would be in line with your desire that we publish practically the chapter as written. May I point out that the ↑choice↓ decision reached following last night's conference was one that called for only three installments which, in any event, would have fitted into February publication of the book and have [page 2] made it quite unnecessary for any delay at all beyond the February date Mr. Latham has told us , in the first place, was to have been the ↑the first↓ date they had planned on ↑could manage. Our choice was reached before your letter came, saying to use at most only two chapters; but I hope you will think this plan feasible↓ Let me set down the method of handling which would serve us best, and ask you to be quite free to not respond to the suggestions if they do not fit your mind. ↑You are to decide of course.↓

↑Could we not↓ begin at the middle of page 66. Perhaps we could publish an introductory note which would bring out how this food problem is more critical today than ever before with the stark need in Russia, with the situation in Central Europe, etc.; how important then it is to visualize the food problem; to understand it as it reaches down from ↑to↓ the most primitive human needs ↑&↓ to the earliest communal activities; and especially ↑[illegible]↓ in the light of this resurgence of the problem during the war years. Of course if you yourself felt that you could write a ↑new↓ introductory paragraph which could be printed as part of the article, that would be ever so much better.

At several places in this chapter you put the tense in the past. This fits most admirably into the historical narrative of the book. But if you feel that in one or two places you could make it present also, that would fit most admirably periodical publication. For example: On page 73, would it be possible to make the sentence begin the second paragraph ↑read↓: "I believed -- and still believe -- that a generous response to this world situation" etc. But perhaps you will not want to do that.

We ↑I↓ should like to be able to send this first chapter to the printer ↑[illegible]↓ next week. ↑Can [illegible] I have it back by early mail?↓

2. Chapter V. A Speculation on Bread Labor and War Slogans. This can readily be published as the second installment as written; in our February Graphic coming out late in January.

3. Chapter X. A Food Challenge to the League of Nations.

But in comparing them, it seems to me you have rewritten nearly all the comparable sections. We could, of course, ↑if you wish,↓ publish a foot-note saying that parts of the chapter had appeared in the New Republic article. [page 3]

As this chapter would be published, on the present schedule, after the book was out, it would be of great benefit to us if you would perhaps at the end of January bring it to date in some way, so that it would stand on its own legs as an article even with those readers that had the book in hand. ↑Perhaps a postscript?↓

There is clearly a tendency towards an economic conference following the disarmament conference. The prospect of such a meeting was one of the factors in making us feel that it was the economic thread in your skein which we should give right-of-way to. I have even in mind that it might be tremendously opportune should you either in closing or ↑in↓ introducing this third installment make a challenging plea for the consideration of food in any such economic conference or for other practical steps that would project your challenge into the future.

It might be that there are paragraphs ↑(experiences & concrete [illustrations?] of [illegible])↓ in Chapter XI bearing on the [food] situation in Europe that you would care to incorporate in either the second or third installment. But in view of your very clearly expressed purpose ↑[two illegible words]↓ not to combine chapters, I should not of course what to press this, although I should like to ask you to keep your mind open as to the possibility of bringing the series to a head in the concluding installment in relation to this winter's developments in some such way as suggested above.

↑I regret my delay caused you distress; and I want you to know how appreciative we are of this opportunity -- to publish in advance. It was altogether too important to make snap judgments on & our members of the Survey staff have been your first readers & the other chapters go off ↑early↓ today [illegible] [under?] separate [illegible] cover.↓ 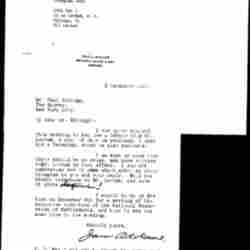 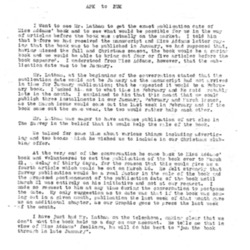 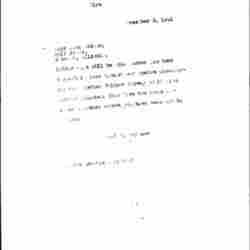 Kellogg discusses the publication of chapters from Addams's Peace and Bread in Time of War in the Survey.