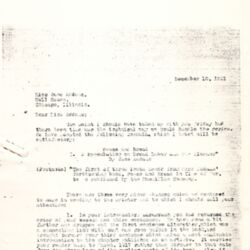 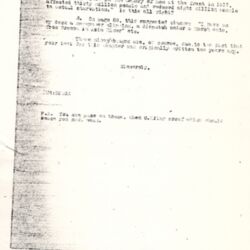 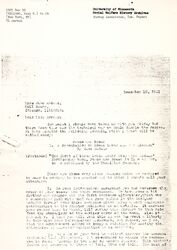 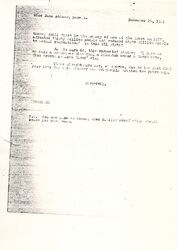 One point I should have taken up with you Friday had there been time was the technical way we would handle the series. We have adopted the following formula, which I trust will be satisfactory.

Peace and Bread
I. A Speculation on Bread Labor and War Slogans*
By Jane Addams

There are three very minor changes which we ventured to make in sending to the printer and to which I should call your attention:

1. In your introductory paragraph you had reversed the order of your second and third sentences. We have gone a bit further and dropped out the first sentence altogether, which was a connecting link with what had gone before in the book, and brought forward your third sentence which makes a most admirable introduction to the chapter published as an article. It carries your reader back to March, 1917 rather than forward to that date from the chronology of the earlier parts of the book. Also it has color. I hope you will feel this is not too great a liberty to take with your introductory paragraph, but rather, as I do, that the arrangement offers as happy a solution for meeting the exigencies of magazine publication as is possible.

2. On page 84 of your text as written ignores the present famine of 1921 altogether. I have ventured to change the sentences to read: "Russia is the land of modern famines. This winter's famine was preceded by those of 1891, 1906 and 1911. The last of [page 2] these, still vivid in the memory of men at the front in 1917, affected thirty million people and reduced eight million people to actual starvation." Is this all right?

3. On page 86, this suggested change: "I have on my desk a newspaper clipping, a dispatch under a March date, from Bressa in Asia Minor" etc.

These minor changes are, of course, due to the fact that your text for this chapter was originally written two years ago.

P.S. You can pass on these, when O.K.'ing proof which should reach you next week.

*The first of three [installments] from Miss Addams' forthcoming book, Peace and Bread in Time of War, to be published by the Macmillan Company.

Underwood suggests minor changes in Addams's chapter for publication in the Survey-Graphic.