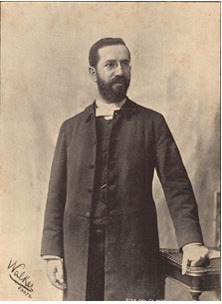 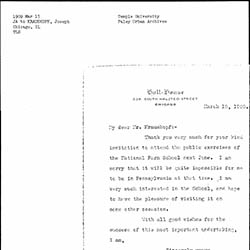 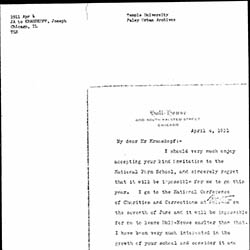 Joseph Krauskopf was born in Poland, immigrating to the United States at the age of fourteen in order to study to become a rabbi. He studied at Hebrew Union College in Cincinnati, and then at the University of Cincinnati. In 1883, he was ordained as a rabbi and then began his ministry in Kansas City, Missouri. While in Missouri, Krauskopf founded the Free Labor Bureau, which lead to his appointed to the Board of National Charities and Corrections. Krauskopf then moved to Philadelphia, where he founded the Patriotic Society of Philadelphia and the Model Dwelling Association. In 1888 he founded the Jewish Publication Society of America. In 1897, he opened the National Farm School in Pennsylvania, which is now Delaware Valley College. During the Spanish American War, President McKinley appointed Krauskopf Special Field Commissioner to study and report on the conditions in U.S. Army camps in Cuba, and in 1900 he was sent to Europe to report on agricultural education. During World War I, he was director of the Food Conservation Commission.

Krauskopf married Rose Berkowitz in 1883. They had three children together. Berkowitz died in 1893, and Krauskopf remarried to Sybil Feineman in 1896. They had one child together. Krauskopf died in 1923.