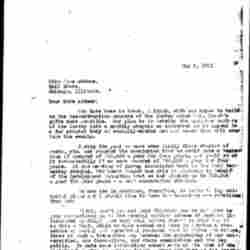 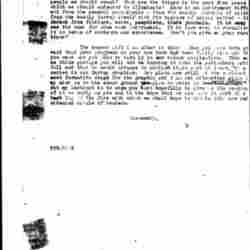 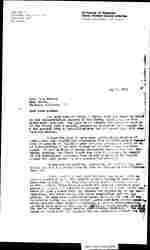 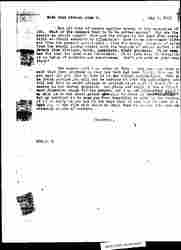 You have been in touch, I think, with our hopes to build on the reconstruction numbers of the Survey which Mrs. Leach's gifts made possible. Our plan is to develop the magazine numbers of the Survey into a monthly graphic so conceived as to appeal to a far greater body of socially-minded men and women than will ever take the weekly.

We are now in position, therefore, to begin to lay editorial plans and I should like to have two heaped-up contributions from you:

First, won't you put your thinking cap on and give us your suggestions as to the general working scheme of such an illustrated monthly? One very real motive factor in starting it is this -- that, while we have worked out here in America a procedure of social and industrial research that is strong in values, there is such a tremendous gap between the psychology of our universities, our foundations, our state commissions and the lay public. We made some interesting experiments at the time of the Pittsburgh Survey in getting things across and have in the years since learned other working principles of social interpretation. We think that some of them can be applied in these monthly [graphics?] the use of graphs, maps, charts, photographs, drawings, -- the [whole] range of implements for reaching the understanding through the eye. [page 2]

But all this of course applies merely to the mechanics of job. What of the message that is to be gotten across? Who are the people we should reach? What are the things in the next five years which we should endeavor to illuminate? Here is an instrument [different] from the general periodicals -- from the weekly journals of [opinion,] from the weekly Survey itself with its baggage of social method -- [different] from findings, books, pamphlets, trade journals. It is easy [to?] see the need for some such instrument. It is less easy to visualize it in terms of contents and experience. Won't you give me your suggestions?

The second gift I am after is this: When you were here [you] said that your progress on your new book had been fairly slow and [that] you were not yet able to turn it in for volume publication. This [made] me think perhaps you will not be turning it into the publishers [until] fall and that we could arrange to publish it, in part at least, as a series in our Survey graphics. Our plans are still at the earliest most formative stage for the graphic and I am not altogether clear [in] my mind as to the exact ground you plan to cover in the beginning ↑your volume↓. But my instinct is to urge you most hopefully to give me the reading of it so early as you can in the hope that we can make it sort of a back log of the fire with which we shall hope to kindle this new and widening circle of readers.

Kellogg asks Addams's advice about the plan to make The Survey a monthly graphic.