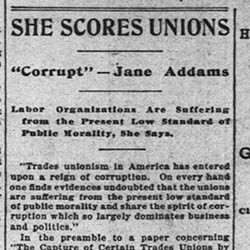 Labor Organizations Are Suffering from the Present Low Standard of Public Morality, She Says.

"Trade unionism in America has entered upon a reign of corruption. On every hand one finds evidences undoubted that the unions are suffering from the present low standard of public morality and share the spirit of corruption which so largely dominates business and politics."

In the preamble to a paper concerning "The Capture of Certain Trade Unions by Corruption," read by Miss Jane Addams, president of the Hull house, to the Ethical society yesterday, occurred the paragraph quoted. The paper was an ethical study of some of the evil aspects for labor organization, and aimed especially to trace the origin, growth, and development of the corruption which is prevalent, according to Miss Addams, in many if not all unions.

The most obvious causes which have directed the growth of corruption in the unions Miss Addams defined as follows:


"While the methods of some labor unions," she said, "are no worse on the whole than the methods adopted by certain organizations of capital, there lies in them a greater menace to the public, since the proportion of the population affected is so much larger. For this reason the corruption that exists in labor unions is analagous to the corruption that exists in many phases of political life"

Spokes in the Wheel.

The greed and personal ambitions of the men who are at the head of unions in some instances, the laxity with which contracts are made and broken, and the zealous manner in whcih the unscrupulous trickery which has come to be a part of business enterprise is imitated, were cited by Miss Addams as being some of the spokes in the wheel which is swiftly grinding corruption into the motives and structure of many trade unions.

The experience and vanity of union officials who are called upon to deal with employers in the matter of contract making and the resultant resentment of the unions also tended, she said, to the development of corrupt practices.

The only check upon its growth, she said, lay in the fact that the unions deal in collective bargaining and the inherent publicity of large dealings tends inevitably to a higher standard of public morality.