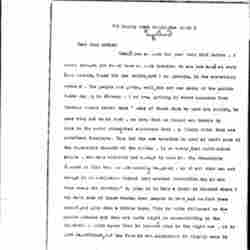 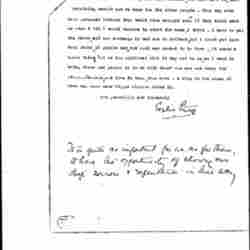 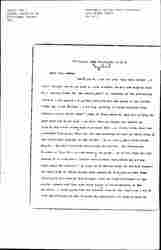 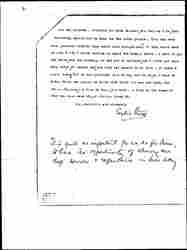 Thank you so much for your very kind letter. I never thought you would take so much trouble. We are now hard at work here raising funds for the famine, and I am speaking in the elementary schools. The people are giving well, but not one penny of the public funds may go to Germany. I am now getting my worst accounts from there. A recent letter says "many of those whom we know are praying to pass away and be at rest, as they feel no longer any desire to live in the awful misery that surrounds them, a misery which they are powerless to relieve. Then too the new taxation to meet at least some of the reparation demands of the Allies, is so heavy, that cultivated people, who have hitherto had enough to meet all the reasonable demands of life will be practically beggared. As if all this was not enough it is everywhere feared that another revolution may at any time sweep the country." My plan is to have a house in Holland where I can have some of these broken down people to feed, and comfort them myself, and give them a little hope. This is quite different to the public schemes and they are quite right in concentrating on the children. I quite agree that Mr. Hoover's plan is the right one. He is just magnificent, but the Friends who administer it rightly keep to [page 2] the one purpose. Probably you have Germans, who feel as I do, that something should now be done for the older people. They may even have personal friends they would like brought out. If they would send me even £100 I would venture to start the home, I think. I have to pay the fares, and our exchange is bad now in Holland, but I could get more help later, if people saw how much was needed to be done. It seems a small thing but on the spiritual side it may not be so, as I want to bring these sad people in touch with those who are now ready for reconciliation, and love to them, from here. A drop in the ocean of need may soon make bigger circles round it.

↑It is quite as important for us, as for them, to have the opportunity of showing our deep sorrow & repentance in this way↓

Sturge tells Addams of her plans to provide relief for famine victims in Germany, particularly adults, by setting up a home in Holland.