A Program During War Time, April 1917 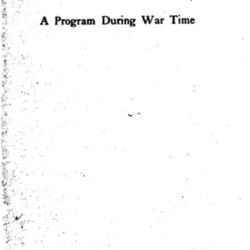 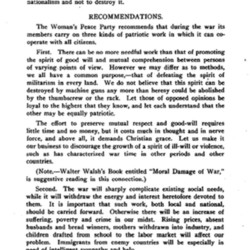 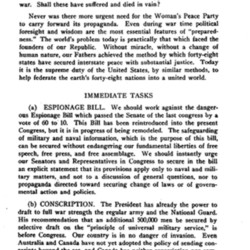 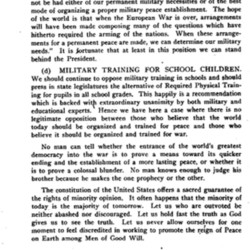 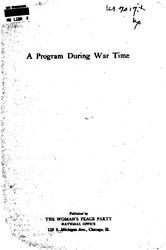 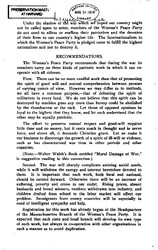 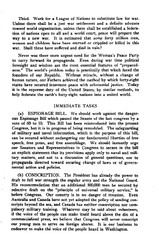 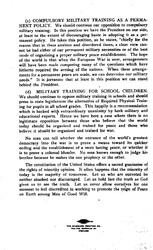 A Program During War Time

The Woman's Peace Party recommends that during the war its members carry on three kinds of patriotic work in which it can cooperate with all citizens.

First. There can be no more needful work than that of promoting the spirit of good will and mutual comprehension between persons of varying points of view. However we may differ as to methods, we all have a common purpose, -- that of defeating the spirit of militarism in every land. We do not believe that this spirit can be destroyed by machine guns any more than heresy could be abolished by the thumbscrew or the rack. Let those of opposed opinions be loyal to the highest that they know, and let each understand that the other may be equally patriotic.

The effort to preserve mutual respect and good-will requires little time and no money, but it costs much in thought and in nerve force, and above all, it demands Christian grace. Let us make it our business to discourage the growth of a spirit of ill-will or violence, such as has characterized war time in other periods and other countries.

Second. The war will sharply complicate existing social needs, while it will withdraw the energy and interest heretofore devoted to them. It is important that such work, both local and national, should be carried forward. Otherwise there will be an increase of suffering, poverty and crime in our midst. Rising prices, absent husbands and bread winners, mothers withdrawn into industry, and children drafted from school to the labor market will affect our problem. Immigrants from enemy countries will be especially in need of intelligent sympathy and help.

Registration for this work has already begun at the Headquarters of the Massachusetts Branch of the Woman's Peace Party. It is expected that each state and local branch will develop its own type of such work, but always in [cooperation] with other organizations in such a manner as to avoid duplication. [page 3]

Third. Work for a League of Nations to substitute law for war. Unless there shall be a just war settlement and a definite advance toward world organization, unless there shall be established a federation of nations open to all and a world court, peace will prepare the way to a new war. It is estimated that some forty million men, women and children have been starved or crippled or killed in this war. Shall these have suffered and died in vein?

Never was there more urgent need for the Woman's Peace Party to carry forward its propaganda. Even during war time political foresight and wisdom are the most essential features of "preparedness." The world's problem today is practically that which faced the founders of our Republic. Without miracle, without a change of human nature, our Fathers achieved the method by which forty-eight states have secured interstate peace with substantial justice. Today it is the supreme duty of the United States, by similar methods, to help federate the earth's forty-eight nations into a united world.

(a) ESPIONAGE BILL. We should work against the dangerous Espionage Bill which passed the Senate of the last Congress by a vote of 60 to 10. This Bill has been reintroduced into the present Congress, but it is in progress of being remodeled. The safeguarding of military and naval information, which is the purpose of this bill, can be secured without endangering our fundamental liberties of free speech, free press, and free assemblage. We should instantly urge our Senators and Representatives in Congress to secure in the bill an explicit statement that its provisions apply only to naval and military matters, and not to a discussion of general questions, nor to propaganda directed toward securing change of laws or of governmental action and policies.

(b) CONSCRIPTION. The President has already the power to draft to full war strength the regular army and the National Guard. His recommendation that an additional 500,000 men be secured by selective draft on the "principle of universal military service," is before Congress. Our country is in no danger of invasion. Even Australia and Canada have not yet adopted the policy of sending conscripts beyond the sea, and Canada has neither conscription nor compulsory military training. Whatever may be said about volunteers, if the voice of the people can make itself heard above the din of a commercialized press, we believe that Congress will never conscript our young men to serve on foreign shores. It is our business to endeavor to make the voice of the people heard in Washington. [page 4]

(c) COMPULSORY MILITARY TRAINING AS A PERMANENT POLICY. We should continue our opposition to compulsory military training. In this position we have the President on our side, at least to the extent of discouraging haste in adopting it as a permanent policy. He takes this position, so he states "chiefly for the reason that in these anxious and disordered times, a clear view cannot be had either of our permanent military necessities or of the best mode of organizing a proper military peace establishment. The hope of the world is that when the European War is over, arrangements will have been made composing many of the questions which have hitherto required the arming of the nations. When these arrangements for a permanent peace are made, we can determine our military needs." It is fortunate that at least in this position we can stand behind the President.

(d) MILITARY TRAINING FOR SCHOOL CHILDREN. We should continue to oppose military training in schools and should press in state legislatures the alternative of Required Physical Training for pupils in all school grades. This happily is a recommendation which is backed with extraordinary unanimity by both military and educational experts. Hence we have here a case where there is no legitimate opposition between those who believe that the world today should be organized and trained for peace and those who believe it should be organized and trained for war.

No man can tell whether the entrance of the world's greatest democracy into the war is to prove a means toward its quicker ending and the establishment of a more lasting peace, or whether it is to prove a colossal blunder. No man knows enough to judge his brother because he makes the one prophecy or the other.

The constitution of the United States offers a sacred guarantee of the rights of minority opinion. It often happens that the minority of today is the majority of tomorrow. Let us who are outvoted be neither abashed nor discouraged. Let us hold fast the truth as God gives us to see the truth. Let us never allow ourselves for one moment to feel discredited in working to promote the reign of Peace on Earth among Men of Good Will. 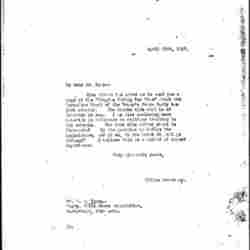 Secretary to Jane Addams to Susie Alice Richardson Radley, May 5, 1917 The Woman's Peace Party outlines steps that peace activists can take once war is declared.