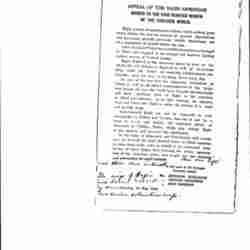 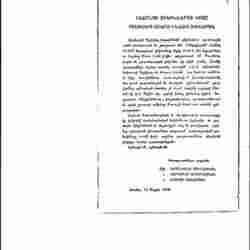 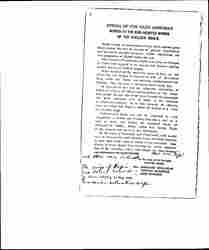 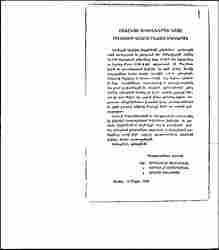 APPEAL OF THE HAJIN ARMENIAN
WOMEN TO THE KIND HEARTED WOMEN OF THE CIVILIZED WORLD.

Hajin a town of mountainous Cilicia, which suffered great losses during the war on account of general deportations and massacres, actually possesses 10,000 inhabitants out of a population of 35,000 before the war.

Since March 13th 1920 these 10,000 Armenians are besieged by Turks and engaged in an unequal and hopeless fighting against masses of Turkish hordes.

Hajin deprived of the necessary means to keep on her efforts for [self-defense] is deprived as well of all exterior help, while the Turks are receiving reinforcements continually, thus the siege is becoming closer every day.

In spite of the fact that the Armenian authorities of Cilicia as well as all official representatives of the Armenian people all over the world have brought the lamentable and most [perilous] state of Hajin to the attention of Allied governments, up to this moment no effective steps are taken and Hajin is under the horrors of a cruel and deathly siege.

Unfortunately Hajin can not be compared to such strongholds as Belfort and Verdun, thus she is not in a state to resist any further the organized forces of thousands of "Milliji" Turks, which may occupy Hajin at any moment and massacre her inhabitants.

In the name of Humanity and Christianity, with tearful eyes we beseech the kind-hearted ladies of Allied countries to raise their noble voice in behalf of the exhausted inhabitants of brave Hajin, thus securing the active intervention of the victorious Allies, who fought for the freedom and deliverance of small nations. ↑their own life and their own interests↑

↑The siege of Hajin has been raised by an Armenian volunteer corp.↓

In the name of the besieged Armenian women 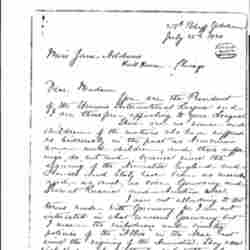 Bourjakian, Shikrdmian, and Mangrian appeal to Allied women to intervene on behalf of Hajin, Armenia in its fight against the Turks.

An Armenian version on page 2 has not been transcribed.