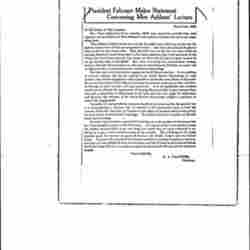 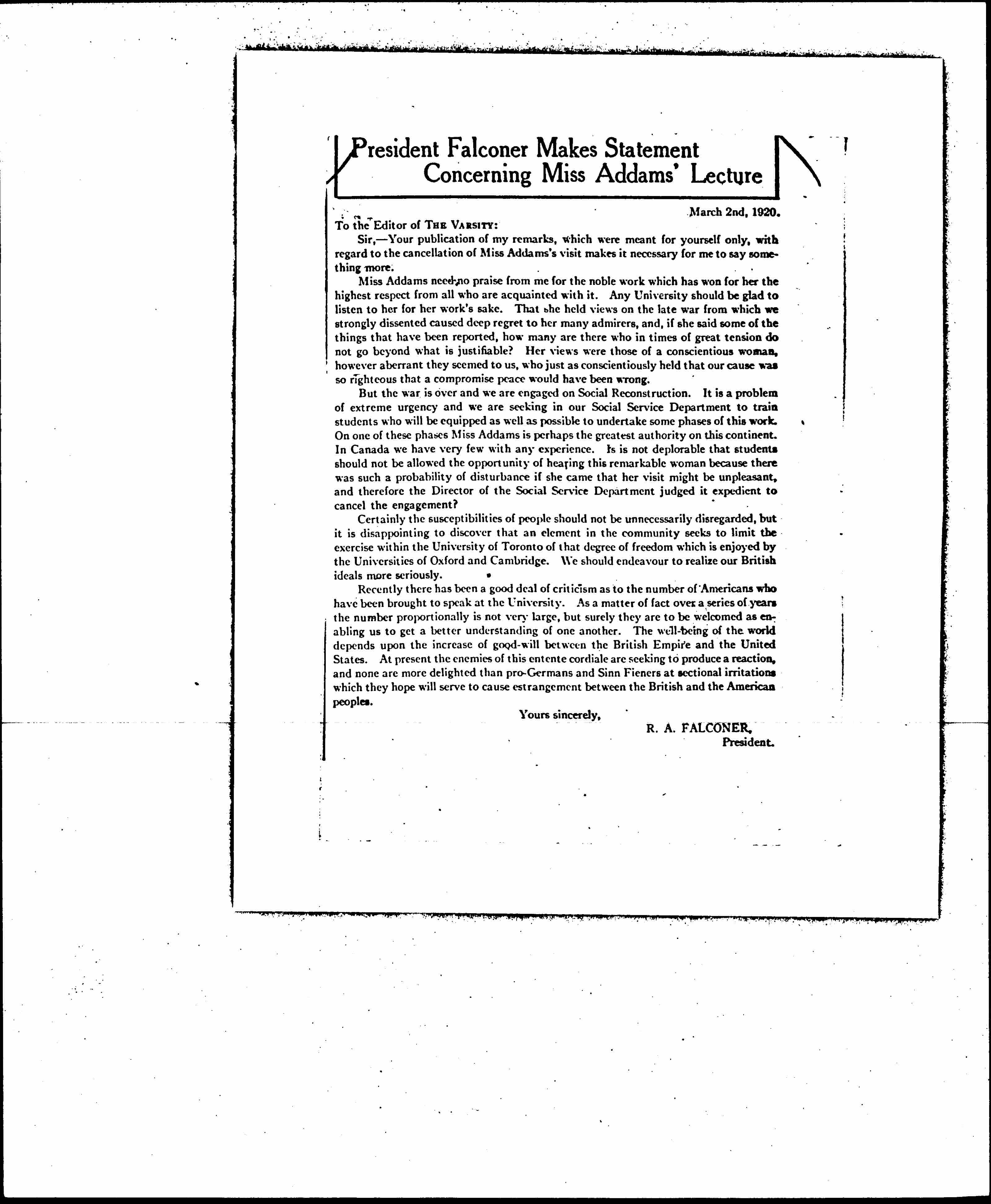 To the Editor of THE VARSITY:

Sir, -- Your publication of my remarks, which were meant for yourself only, with regard to the [cancelation] of Miss Addams's visit makes it necessary for me to say something more.

Miss Addams need no praise from me for the noble work which has won for her the highest respect from all who are acquainted with it. Any University should be glad to listen to her for her work's sake. That she held views on the late war from which we strongly dissented caused deep regret to her many admirers, and, if she said some of the things that have been reported, how many are there who in times of great tension do not go beyond what is justifiable? Her views were those of a conscientious woman, however aberrant they seemed to us, who just as conscientiously held that our cause was so righteous that a compromise peace would have been wrong.

But the war is over and we are engaged on Social Reconstruction. It is a problem of extreme urgency and we are seeking in our Social Service Department to train students who will be equipped as well as possible to undertake some phases of this work. On one of these phases Miss Addams is perhaps the greatest authority on this continent. In Canada we have very few with any experience. Is [it] not deplorable that students should not be allowed the opportunity of hearing this remarkable woman because there was such a probability of disturbance if she came that her visit might be unpleasant, and therefore the Director of the Social Service Department judged it expedient to cancel the engagement?

Certainly the susceptibilities of people should not be unnecessarily disregarded, but it is disappointing to discover that an element in the community seeks to limit the exercise within the University of Toronto of that degree of freedom which is enjoyed by the Universities of Oxford and Cambridge. We should endeavor to realize our British ideals more seriously.

Recently there has been a good deal of criticism as to the number of Americans who have been brought to speak at the University. As a matter of fact over a series of years the number proportionally is not very large, but surely they are to be welcomed as enabling us to get a better understanding of one another. The well-being of the world depends upon the increase of good-will between the British Empire and the United States. At present the enemies of this entente cordiale are seeking to produce a reaction, and none are more delighted than pro-Germans and Sinn Fieners at sectional irritations which they hope will serve to cause estrangement between the British and the American peoples.

Falconer writes a letter to the editor criticizing the decision to cancel Addams' lecture at the University of Toronto.