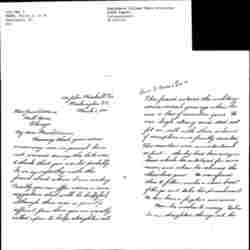 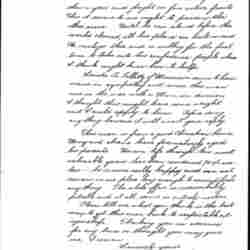 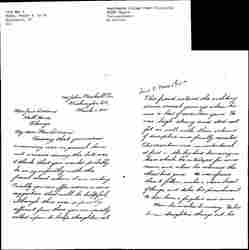 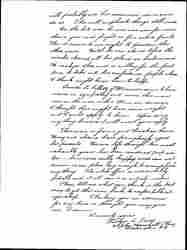 Knowing that your ideas concerning war in general have not wavered during the late war, I think that you would probably be in sympathy with the friend about whom I am writing. Possibly you can offer advice or some suggestion that will be helpful, although this case is possibly different from those you are usually called upon to help straighten out. [page 2] This friend entered the military service several years ago when he was a lad of seventeen years. He was high strung and did not fit in well with their scheme of discipline and finally deserted. This desertion was unintentional at first -- the boy had been away on leave which he outstayed for some reason, and when he returned the others had gone. He was afraid then to follow, make a clean breast of things, and take his punishment. He has been a fugitive ever since.

Now he wishes to marry. Unless he can straighten things out he [page 3] will probably use his assumed name and do so. This will complicate things still more.

In the late war he was overseas for more than a year and fought on five active fronts. This it seems to me ought to pardon the other error. Until he can stand before the world cleared, all his plans are built on sand. He realizes this and is willing for the first time to take into his confidence people whom I think might know how to help.

Senator La Follette of Wisconsin seems to have views in sympathy and since this man was in the war with a Wisconsin division, I thought this might have some weight and I could apply to him. Before doing anything however I will await your reply.

This man is from a good Christian home. Worry and shame have prematurely aged his parents. His own life through ten most valuable years has been rendered 70% useless -- he is never really happy and cannot remain in one place long enough to accomplish anything. The whole affair is indescribably pitiable and it all seems so entirely useless.

Please tell me what you think is the best way to get this man back to respectable citizenship. Thanking you in advance for any time or thought you may give me, I remain

Freed asks Addams for advice in helping a friend whose life has been derailed by his deserting the army.

Freed's "friend" referenced in this letter has not been identified.