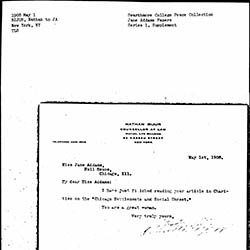 Nathan Bijur worked as a lawyer, specializing in corporation law and reorganizing railroads. In 1905 he became president of the New York Conference of Charities, and he was very involved in philanthropy. In 1910 he was elected to as a Supreme Court Justice, serving two terms. While serving as a Justice, Bijur was also often chosen to sit many times as one of the members of the Appellate Term. He was a trustee of the Baron de Hirsch Fund and of the Hebrew Free Trade School, and a member of Legal Aid Society, Ethical Culture Society, Educational Alliance and the Federation for the Support of Jewish Philanthropic Societies, as well as a founder of the American Jewish Committee. Bijur also aided with many other philanthropies, such as the National Farm School, National Jewish Hospital, and the American Jewish Historical Society.