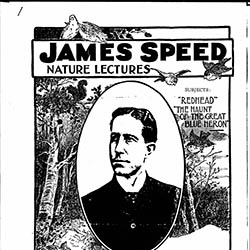 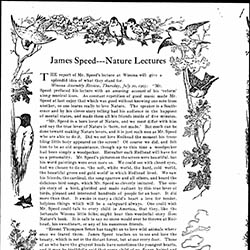 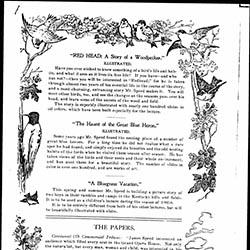 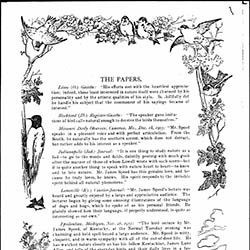 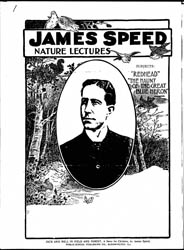 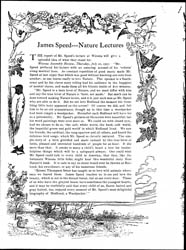 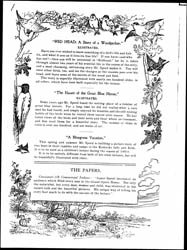 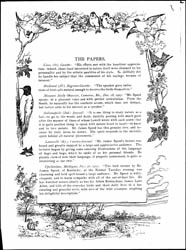 The report of Mr. Speed's lecture at Winona will give a splendid idea of what they stand for:

Winona Assembly Review, Thursday, July 20, 1903: "Mr. Speed prefaced his lecture with an amusing account of his 'reform' along musical lines. As constant repetition of good music made Mr. Speed at last enjoy that which was good without knowing one note from another, so one learns really to love Nature. The speaker is a Southerner and by his clever story telling had his audience in the happiest of mental states, and made them all his friends inside of five minutes.

"Mr. Speed is a born lover of Nature, and we must differ with him and say the true lover of Nature is 'born, not made.' But much can be done toward making Nature lovers, and it is just such men as Mr. Speed who are able to do it. Did we not love Redhead the moment his trembling little body appeared on the screen? Of course we did, and felt him to be an old acquaintance, though up to this time a woodpecker had been simply a woodpecker. Hereafter each Redhead will have for us a personality. Mr. Speed's pictures on the screen were beautiful, but his word paintings were even more so. We could see with closed eyes, had we chosen to do so, 'the soft, white world, the hard, cold world, the beautiful green and gold world' in which Redhead lived. We saw his friends, the cardinal, the song sparrow and all others, and heard the delicious bird songs, which Mr. Speed so cleverly imitated. The simple story of a bird, glorified and made radiant by this true lover of birds, pleased and interested hundreds of people for an hour. It did more than that. It awoke in many a child's heart a love for tender, helpless things which will be a safeguard always. One could wish Mr. Speed could talk to every child in America, that they, like the fortunate Winona little folks; might hear this wonderful story from Nature's book. It is safe to say no stone would ever be thrown at Redhead, his sweetheart, or any of his numerous friends.

"Ernest Thompson Seton has taught us to love wild animals where once we feared them. James Speed teaches us to see and love the beauty, which is not in the distant forest, but at our every door. Those of us who have the grayest heads have sometimes the youngest hearts, and it may be truthfully said that every child of us, flaxen haired and gray haired, too, enjoyed every moment of Mr. Speed's most delightful biography of 'Redhead, a Woodpecker.'"

"RED HEAD: A Story of a Woodpecker."
ILLUSTRATED.

Have you ever wished to know something of a bird's life and habits, and what it sees as it lives its free life? If you have -- and who has not? -- then you will be interested in "Redhead;" for he is taken through almost two years of his eventful life in the course of the story, and a most charming, entrancing story Mr. Speed makes it. You will meet other birds, too, and see the changes as the seasons pass over his head, and learn some of the secrets of the wood and field.

The story is superbly illustrated with nearly one hundred slides in oil colors, which have been built especially for the lecture.

"The Haunt of the Great Blue Heron."
ILLUSTRATED.

Some years ago Mr. Speed found the nesting place of a number of great blue herons. For a long time he did not realize what a rare spot he had found, and simply enjoyed its beauties and the odd nesting habits of the birds when he visited them season after season. He has taken views of the birds and their nests and their whole environment, and has used them for a beautiful story. The number of slides in color is over one hundred, and are works of art.

This spring and summer Mr. Speed is building a picture story of two boys in their rambles and camps in the Kentucky hills and fields. It is to be used as a children's lecture during the season of 1907-8.

It is to be entirely different from both of his other lectures, but will be beautifully illustrated with slides.

Cincinnati (O) Commercial Tribune: "James Speed interested an audience which filled every seat in the Grand Opera House. Not only the naturalist, but every man, woman and child, was interested in his nature talk and the beautiful pictures. His unique way of telling his story had much to do with the success of the lecture." [page 4]

Lima (O.) Gazette: "His efforts met with the heartiest appreciation; indeed, those least interested in nature itself were charmed by his personality and by the artistic qualities of his style. So skillfully did he handle his subject that the commonest of his sayings became of interest."

Missouri Daily Observer, Cameron, Mo., Dec. 18, 1903: "Mr. Speed speaks in a pleasant voice and with perfect articulation. From the South, he naturally has the southern accent, which does not detract, but rather adds to his interest as a speaker."

Indianapolis (Ind.) Journal: "It is one thing to study nature as a fad -- to go to the woods and fields, daintily peering with much gush after the manner of those of whom Lowell wrote with such scorn -- but it is quite another thing to speak with nature heart to heart -- to know and to love nature. Mr. James Speed has this genuine love, and because he truly loves, he knows. His spirit responds to the invisible spirit behind all natural phenomena."

Louisville (Ky.) Courier-Journal: "Mr. James Speed's lecture was heard and greatly enjoyed by a large and appreciative audience. The lecturer began by giving some amusing illustrations of the language of dogs and hogs, which he spoke of as his personal friends. He plainly showed how their language, if properly understood, is quite as interesting as our own."

Ypsilantian, Michigan, Nov. 26, 1903: "The bird lecture by Mr. James Speed, of Kentucky, at the Normal Tuesday evening was charming and held spell-bound a large audience. Mr. Speed is witty, eloquent, and in warm sympathy with all of the out-of-door life. He has watched nature closely as has his fellow Kentuckian, James Lane Allen, and tells of the everyday birds and their daily lives in a fascinating and graceful style, with love of the wild creatures inspiring his delightful descriptions." 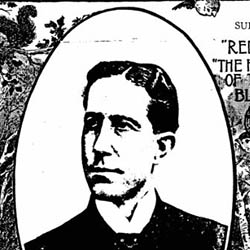 James Speed's Nature Lectures is a circular filled with reviews of and summary of the topics covered in Speed's lectures.