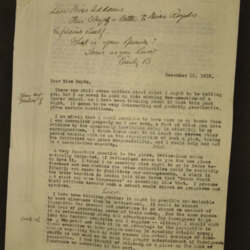 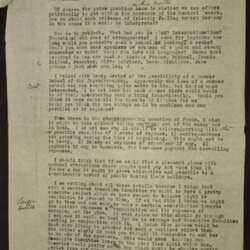 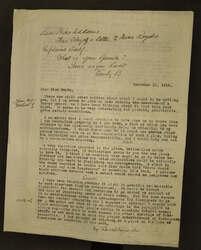 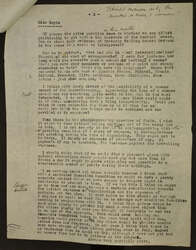 There are still other matters about which I ought to be writing you, but I am moved to pick up this morning the question of a Summer School, as I have been thinking about it much this past night. It seems to me very interesting and probably practicable, given certain conditions.

I am afraid that I shall continue to have more on my hands than I can accomplish properly as I now have, a fact of which you have evidence by the apparently inevitable delay in attending to my correspondence. I think there must be at least one person other person working with me on the organization of such a plan, taking the initiative and prime responsibility, and ↑while↓ I would help and act in a consultative capacity.

A very important question is the place. Switzerland seems naturally indicated, if Switzerland seems to you the one place to have it. I think I or somebody else ought to go to Berne beforehand and see whether the Swiss authorities would be cordially friendly and ready to facilitate our arrangements. A clerk in the Swiss Legation in London told Miss Moore that "Berne would not stand any more Congresses" or something like that. I presume their attitude towards such a school would depend on [program] and speakers.

I have been thinking ↑however↓ whether it might be possible and desirable to meet elsewhere than in Switzerland. It would be almost impossible for Germans and Austrians to go abroad on account of the lack of purchasing power of their money. For the same reason it is extraordinary cheap and advantageous for foreigners to go into the Central countries and I suppose -- although I should want to ↑[look up]↓ this point out that it is an advantage to the population in those countries to have people coming in spending outside money; always supposing that by next summer the actual shortage of foodstuffs is not such as to make the proper entertainment of foreigners impossible. I had thought of Salzburg or a place on the Lake of Constance or something of the sort. [page 2]

Of course the prime question here ↑in this matter↓ is whether we can afford politically to get within the [borders] of the Central Powers, can we stand such evidence of friendly feeling toward Germany in the sense this would be interpreted?

Now as to subject. What had you in mind? Internationalism? Education? And what of arrangements? I mean for instance how long would you conceive such a school lasting? 3 weeks? Would you have star speakers or courses of a quiet and steady character or both? Would you have all languages? Names that occurred to one are such as Anatole France, Duhamel, Romain Rolland, Foerster, Olive Schriner, Lowes Dickinson, Jane Addams -- just some samples.

I talked with Georg Gretor of the possibility of a Summer School of the Jugendbewegung. Apparently the idea of a summer school was something quite noble to him, but he was much interested. I do not know how much chance there would be of their undertaking such a thing independently. Would you think it more desirable for them to do it than for us? Would you think the two things could be combined and run parallel or in sequence?

Then there is the [always pressing] question of funds. I wish it might be done without taking anything out of the money now in hand. I do not see why it should ↑not↓ be self-supporting with a ↑the↓ possible exception of 3 sorts of expense. 1) correspondence and printing during the time of organizing. This ought not to be heavy. 2) Salary or expenses or organizer if any. 3) payments if any to speakers, for instance payment for travelling expenses.

I should think that if we could find a pleasant place with natural attractions where people need pay not more than 10 francs a day it ought to prove attractive and possible to a considerable number of people during their holidays.

I am writing about all those details because I think that with a scattered Executive Committee we ought to have a pretty concrete project which we have reason to believe might be realizable to present to them. If we had this I think we might go to them and ask each to make a certain contribution towards the initial expenses of [organization] and the expenses of carrying out the plan. If such a plan as this should go through I suppose it would be best for us to arrange our Executive Committee meeting in conjunction with it. I think Miss Addams would be much more likely to get over such a combined object than for either singly in case you thought it desirable to ask her to be one of the speakers. This would mean holding our Executive Committee later in the year than April which Mrs. Swanwick would prefer or ↑[through]↓ May which would be a twelve months period from our Congress. In any case I think that there is much more chance of Miss Addams getting over in July, August or September than in April or May, although I have not yet had an answer from her to my letters on the subject. 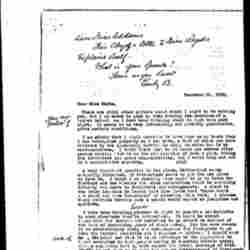 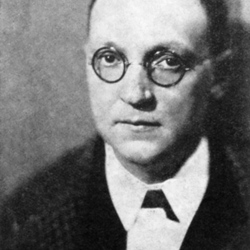 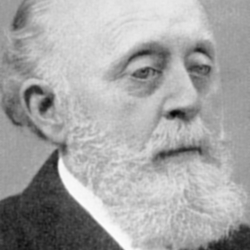 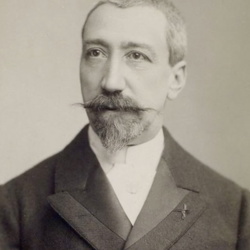 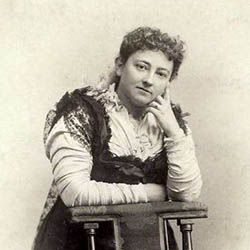 A note on the top of the second page reads: "Should women only be invited or men & women?"
A poor quality image on the microfilm has been replaced with a new scan from the Swarthmore Peace Collection.
This record describes the typed letter, not the note at the top.