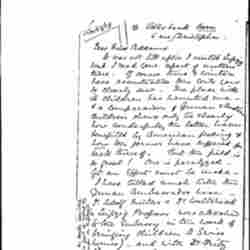 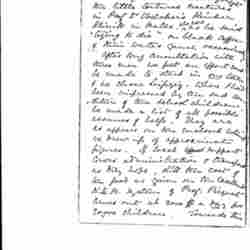 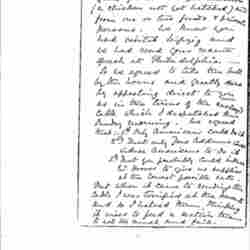 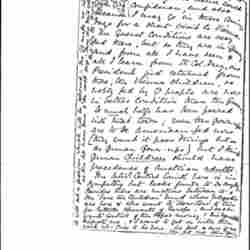 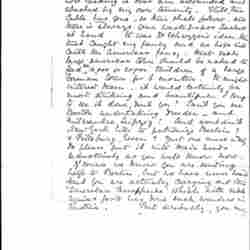 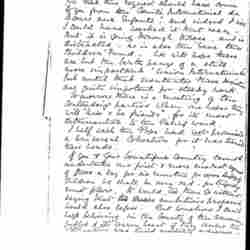 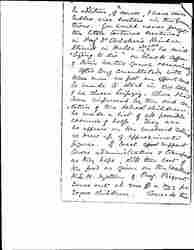 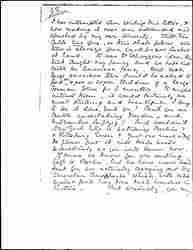 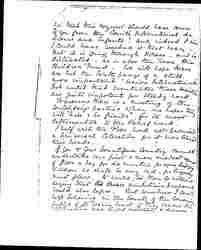 It was not till after I visited Leipzig that I read your report of matters there. Of course time & winter have accentuated the evils you so clearly saw. The place with its children has haunted me -- & a comparison of German & Austrian children shows only too clearly how wonderfully the latter have benefited by American feeding & how the former have suffered for lack thereof. But the field is so great! One is paralyzed -- yet an effort must be made -- I have talked much with the German Ambassador here -- Dr. Adolf Müller & Dr. Woltereck (a Leipzig Professor now attached to the Embassy in the work of bringing children to Swiss homes) -- and with Dr. Fritz Schwyzer ↑[written in left margin] He was the Doctor appointed by the Swiss Govt. to infest the P.O.W. Camps in England↓, who as you know is a ↑Swiss↓ medical man of experience. [page 2] In addition, of course, I have seen endless wise doctors in the German towns. You would never forget the little tortured creatures in Prof Dr Voelcker's Kinder Klinik in Halle, ↑who were↓ as he said "trying to die" on black coffee & their water gruel occasionally.

After long consultation with these men we felt an effort must be made to start in one town & we chose Leipzig, where I had been impressed by the sad condition of the school children. We made a list of all possible avenues of help. They are as appears on the enclosed estimate we drew up of approximate figures. If local effort support covers administration & transport as they hope, still the cost of the food as given on the excellent N.E.M. system of Prof. Pirquet comes out at 2000$ a day for 20,000 children. Towards this [page 3] sum we can only look for help to America -- except perhaps a grant from the Pope's collection (a chicken not yet hatched) and from one or two funds & private persons. We knew you had visited Leipzig and we had read your recent speech at Philadelphia -- So we agreed to take the bull by the horns and greatly dare by appealing direct to you as in the terms of the enclosed cable which I dispatched this Sunday morning. We agreed that: --

1st Only Americans could do it

2ndly That only Jane Addams could induce Americans to do it

3rdly That you probably could induce Mr. Hoover to give us supplies at the lowest possible rate.

But when it came to sending the cable I was terrified at the amounts and so I halved them, thinking it wiser to feed a section than to ask too much and fail. [page 4]

I asked you to reply to Dr. Schwyzer's address thinking his name would give you confidence, and also because I near go in these coming days for a short visit to Vienna. The general conditions are very sad there, but so they are in Germany and from all I have seen & all I learn from Lt. Col. Frey, our President just returned from there, the Vienna children, so nobly fed by V. people are now in better condition than the Germans. So much help has been poured into that town; even the grown-ups are to be American-fed now (they want it poor [things] but so do German grown-ups) but I think German children should have precedence of Austrian adults.

The Inter'l Central [illegible] here is in sympathy but lacks funds to do anything. Besides there are ructions between it & the 'Save the Children' Fund whose delegates are here & who want to 'kow-tow' to the pro-Entente elements of Europe -- and each wants control of the Pope's money! Their squabble disgusts me -- & I want to get on with the work [which] cries to be done. We feel so sure if we can set one town going [written in left margin] it will set a fashion which will be followed -- The G's make us [illegible] as the A's have done & the world says 'Those who don't ask don't want.' But they do. Forgive me for troubling you. [illegible] yours

[S.S.] I was interrupted when writing this letter, & now reading it over am astounded and abashed by my own temerity. Still, the cable has gone, so this shall follow -- and there is always your wastepaper basket at hand. It was Dr. Schwyzer's idea, this, that caught my fancy and we hope will catch the American fancy -- that each large American town should be asked to feed ↑the↓ 10,000 or 20,000 children of a large German town for 6 months. It might interest them -- it would certainly be most striking and beautiful. I long to see it done, don't you? Can't you see Boston undertaking Dresden -- and Milwaukee, Leipzig? And wouldn't New York like to patronize Berlin? & Pittsburg, Essen? Just one meal a day. Do please put it into their heads seductively as you well know how.

Of course we know you are sending help to Berlin, but we have never heard that you are actually carrying out the 'American [Auspices?]' which with rich, regular food has done such wonders in Austria. But seriously, you may [page 6] feel that this request should have come to you from the 'Comité International de Secours aux Enfants' -- and indeed I wish I could have worked it that way -- But it is going through throes -- and is distracted -- as is also the 'Save the Children' Fund -- we will hope these are but the birth pangs of a still more important 'Union Internationale' but until that [eventuales?] these societies are quite impotent for steady work.

[Tomorrow] there is a meeting of the contending parties when one hopes they will "kiss & be friends," for its most detrimental to the relief work.

I half wish the Pope had not promised a universal collection for it has turned their heads.

If you & your bountiful country cannot undertake our first & more modest request of $1000 a day for six months for 10,000 Leipzig children we shall be very sad -- for tragedy must follow. It would, too, then go without saying that the more ambitious proposal would also lapse. But somehow I can't help believing in the bounty of the American public & its warm heart if they knew the alternative was child mortality & disease --