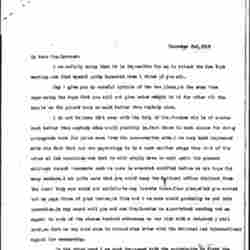 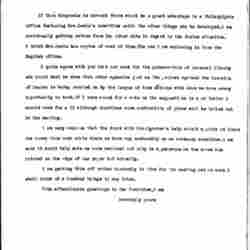 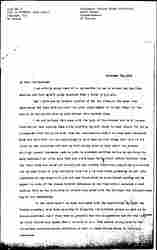 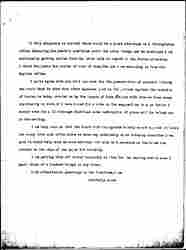 I am awfully sorry that it is impossible for me to attend the New York meeting and find myself quite homesick when I think of you all.

May I give you my careful opinion of the two plans, at the same time expressing the hope that you will not give undue weight to it for after all the people on the ground know so much better than anybody else.

I do not believe that even with the help of Mrs. Karsten who is of course much better than anybody else could possibly be, that there is much chance for doing propaganda work for peace even from the conservative side. I am very much impressed with the fact that our war psychology is in a much earlier stage than that of the other allied countries and that we will simply have to wait until the present attitude toward movements such as ours is somewhat modified before we can hope for many members. I am quite sure that you could keep the National office distinct from the local body and would not anticipate any trouble there. Your plan, which you worked out on page three of your letter, is fine and I am sure could gradually be put into operation. In any event will you not ask Mrs. Karsten to superintend sending out an appeal to each of the eleven hundred addresses on our list with a returned postal card, so that we may know whom to circularize later with the National and International appeal for membership.

On the other hand I am much impressed with the opportunity to Fight the Famine crusade. I have been speaking to Hungarian and Austrian groups as well as to German-Americans and I find them so grateful for the [cooperation] and for the interest in their fellow countrymen that I am sure it is a fine method of approach to the "alien" and Americanization situation as well as other values which it obviously possesses. [page 2]

If this diagnosis is correct there would be a great advantage in a Philadelphia office featuring Mrs. Lewis's committee until the other things can be developed. I am continually getting cables from the other side in regard to the famine situation. I think Mrs. Lewis has copies of most of them. The one I am enclosing is from the English office.

I quite agree with you that our work for the preservation of personal liberty etc. could best be done [through] other agencies just as the protest against the invasion of Mexico is being carried on by the League of Free Nations with whom we have every opportunity to work. If I were asked for a vote on the suggestions in your letter I should vote for A II although doubtless some combination of plans will be talked out in the meeting.

I am very anxious that the Board with Mrs. Karsten's help should appoint as least one women from each state where we have any membership on an advisory committee. I am sure it would help make us more national not only in appearance as the names are printed on the edge of our paper but actually.

I am getting this off rather hurriedly in time for the meeting and am sure I shall think of a hundred things to say later.

With affectionate greetings to the Committee, I am

Addams tells Spencer her ideas about next steps for the Woman's Peace Party given the situation in the United States.

The inclosed letter was not found.