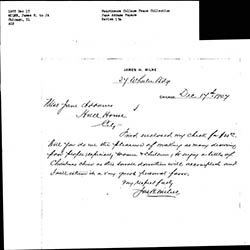 James H. Milne immigrated to the United States from Scotland in 1863 and worked as a railroad worker for ten years. In 1873 he joined the Chicago Board of Trade, and from 1884 to 1885 he was the Vice President of the Board and Chairman of the Bucket Shop committee. Milne focused on export trade, and he was responsible for the first shipment made from Chicago in 1878. In 1885, Milne was Chairman of the Board's Market Quotations Committee. While serving in this position, Milne was under investigation for maladministration, being accused of not following protocol while doing business with bucket shops. However, Milne was exonerated after the investigation.

Milne was married to Rena R. Milne, who died by 1900. They had three children together: George, Jessie, and Marion. Milne died in 1916.