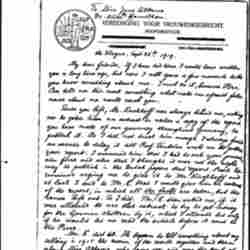 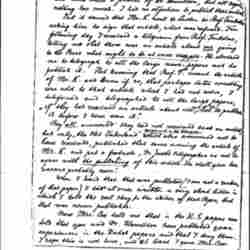 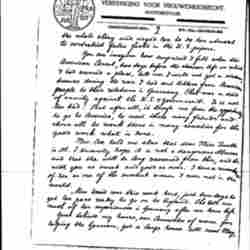 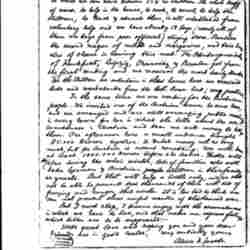 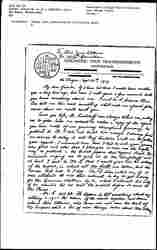 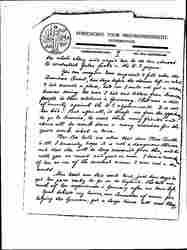 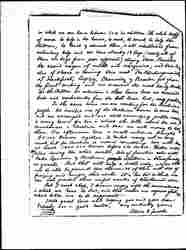 My dear friends, If I have had time I would have written you a long time ago, but now I will spare a few moments to let you know something about me. I must do it, because Mrs. Cox told me this week something what made me afraid false news about me would reach you.

Since you left, Mr. Kirchhoff was always behind me, asking me to give him an extract or rather a copy of the report you have made of our journey throughout Germany, to publish it. As I did not trust him enough I always found an excuse to delay it till Prof. Tendeloo wrote me to publish your report. I answered him that I had to ask your permission first and also that I thought it was not the right way to publish in the Dutch papers that report. But he remained urging me to give it to Mr. Kirchhoff and at last I said to Mr. K. that I would give him an extract of the report, in which all the facts are taken, but the names left out. So I did. Mr. K. then asked me, if it was allowed to use that extract to try to get money for the German children by it, which I allowed but only if he would let me read the article before it went to the Press.

Mr. K did SO. He began to tell something about my calling in 1915 the Women of the World together and then about Miss Addams, who came over and was the soul of the Congress and a lot of nice things more about Miss Addams, [page 2] and some lines in praise of Dr. Hamilton, but all together nothing too much. I had no objection to publish that article.

But it seemed that Mr. K. went to Leiden to Prof. Tendeloo asking him to sign that article, which was refused. The following day I received a telegram from Prof. Tendeloo, telling me that there was an article about me going to the Press what ought to be at once stopped. He advised me to telegraph to all the large [newspapers] not to publish it. Not knowing that Prof. T meant the article of Mr. K. and even if so, that perhaps later something was add to that article which I had not seen, I [telephoned] and telegraphed to all the large papers, "if they had received an article about me, ↑and if so↓ not to publish it before I have seen it."

They all answered they had not received such an article, but only "the Het Vaderland" which ↑comes out in the Hague↓ which also answered not to have received, published that same evening the article of Mr. K. and put a footnote "Dr. Jacobs telegraphs us not to agree with the publishing of this article. She shall give her reasons probably soon."

When I heard that that was published (I am not a reader of that paper) I had at once written a very short letter in which I told the real story to the editor of that Paper, but that was never published.

Now Mrs. Cox told me that in the U.S. papers was told that you and Dr. Hamilton have published your experiences in the Dutch papers and that I deny them. I hope this is not true, and at least I gave Mrs. Cox [page 3] the whole story and urged her to do her utmost to contradict false facts in the U.S. papers.

You can imagine how surprised I felt when the American Consul, two days before the steamer left on which I had secured a place, told me I could not get a [visa], because during the war I had sent letters from American people to their relations in Germany. That was a deed of enmity against the U.S.'s Government. It is not too bad! But after all, it bereft me from the opportunity to go to America, to meet there many friends and above all to work there in many societies for the good work what is done.

Mrs. Cox told me also that dear Miss Smith is ill. I sincerely hope it is not a dangerous illness and that she will be long recovered from this, and be with you as sweet and good as ever. I have a remembrance of her as one of the sweetest women I ever met in the world.

Miss Wood was this week here, just two days to get her pass ready to go on to England. She told me much of her experiences in Germany after we have left.

Just behind my house, our Committee of women for helping the Germans, got a large house till next May, [page 4] in which we can have between 25 & 30 children. The whole staff of women to help in the house, to cook, to scrub, to help the children, to teach & educate them, is all established from voluntary help and we have already 12 boys (nearly all of them are boys from poor officials) staying there. Besides the second wagon of milk and margarine, and this time also of cheese is leaving this week. The Oberburgermeister of Frankfurt, Leipzig, Chemnitz & Breslau got from the first sending and we received the most hearty thanks. For the children we entertain in the house here we received beds and washstands from the Holl. Amer. line; very practical.

In the same time we are working for the Austrian people. We invited one of the Austrian women to come here, and we arranged and are still arranging public meetings in every town for her in which she tells about the circumstances in Austria and then we ask money to help them. One afternoon here a small audience brought 25.000 kroner together. In Dutch money not so very much, but for Austria it meant something. We will have at least 1000.000 Kroner before she leaves. There will be also during the whole winter, lots of families who will take German & Austrian people children in their family as guests. But that will help a little only, and we shall not be able to prevent that thousands of them will die of freezing and hunger this winter. It is too bad to think one cannot prevent these awful results of this damned war.

But I must stop, I become angry with the circumstances in which we have to live, and that makes me express feelings which better are to be suppressed.

With great love and hoping you and your dear friends are in good health, very cordially yours

Emergency Committee for the Assistance of Germans, Austrian and Hungarians in Distress 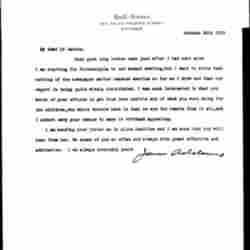 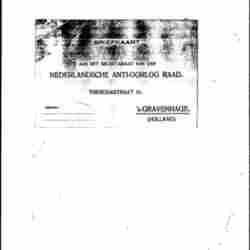 Jacobs explains to Addams how a report got out that she disavowed Addams's report on the German trip and reports on her activities.