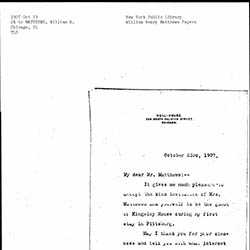 William Henry Matthews was born in Surrey, England, emigrating to the United States in 1889. His schooling ended at age 12 and he spent the next seven years working in the textile mills. Persuaded by a Congregational minister, Matthews rekindled his schooling, eventually graduating from Williams College. In 1901, he was appointed assistant director of Union Settlement, and in 1902 became the head of Kingsley House in Pittsburgh, PA. He remained there until 1910 and had a profound impact on the settlement house. Matthews worked as president of the Board of Child Welfare in New York, along with other various social welfare programs.