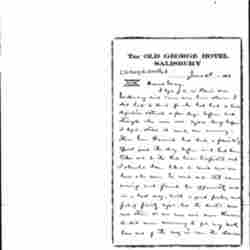 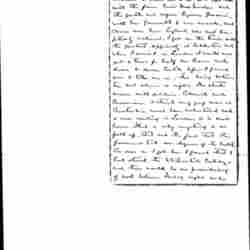 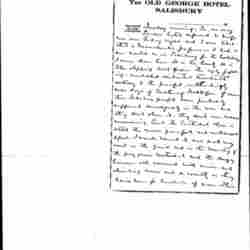 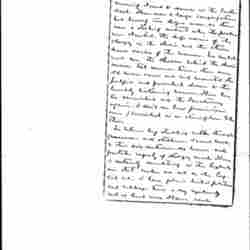 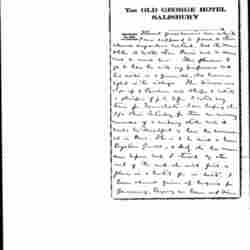 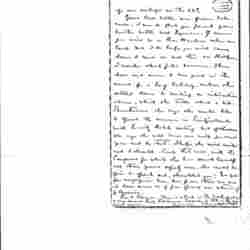 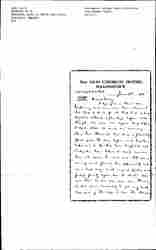 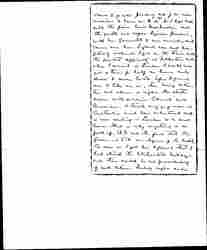 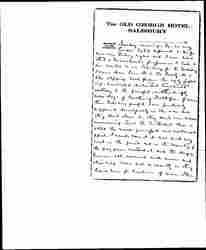 I left J. A. in Paris on Wednesday and came over here alone. I did hate to do it, for she had had a bad digestive attack a few days before and though she was all right long before I left. Still it made me uneasy. Then Mrs. Herrick had had a fainting spell just the day before and had been taken out to the Red Cross hospital and I should have liked to wait and see how she was. We went out that same evening and found her apparently not in a bad way, with a good pulse and feeling fairly right, but the doctor was not there so we were not sure. However it did seem necessary to get my work here out of the way in case the chance [page 2] came to go into Germany and J. A. was anxious to have me to do ↑[it]↓. So I left her with the firm Miss Macmillan and the gentle and vague Sigora Genoi, with Mr. Gannett to run errands, and came on here. England was not hospitably inclined. I got on the train with the greatest difficulty at Folkestone and when I arrived in London I could not get a taxi for half an hour and drove to seven hotels before I found one to take me in, this being between ten and eleven at night. The streets swarm with soldiers. Colonials and Americans. I think every young man in Australia must have volunteered and is now waiting in London to be sent home. That is why everything is so full up, that and the fact that the government took over dozens of the hotels. As soon as I got here I feared that I had struck the Whitsuntide holidays and there would be no possibility of work between Friday night and [page 3] Sunday morning. So, as my London hotel refused to keep me over Friday night and I was told that a [illegible] professor I had to see would be in Salisbury for the holiday, I came down here. It is too lovely. It is like slipping back from the ugly, [fighting], muddled, distracted twentieth century to the peaceful, unthinkably sure days of Anthony Trollope. Of course the Salisbury people have probably suffered dreadfully in the war but they don't show it, they don't even [wear] mourning. And the Cathedral close is still the most peaceful and unchanged spot. I wander round it and soak my soul in its quiet and it the beauty of the gray green cathedral and its clergy houses all covered with vines and climbing roses and so exactly as they [have] been for hundreds of years. This [page 4] morning I went to service in the Cathedral. There was a larger congregation but hardly two dozen men, so there was a striking contrast when the psalms were chanted , the deep voices of the clergy in the choir and the thin sweet voices of the women. We could not see the chorus behind the choir screen till sermon time, then one old man came out and mounted the pulpit, and preached down to the humbly listening women. Then he too vanished into the Sanctuary again. I don't see how feminism even flourished in an atmosphere like this.

In between long [strolling?] walks through greenness and stillness, I came back to this six-centuries old house and partake eagerly of stodgy meals. There is certainly something in the English air that makes me eat as the English eat. I have plain boiled potatoes and cabbage twice a day regularly and at least over them some [page 5] stewed gooseberries [illegible] which I am supposed to [pour on] their almost sugarless custard. All the same I like it better than Paris and it does cost so much less. This afternoon I go to have tea with my [professor] and his sister in a green, old house right in the village. Then tomorrow I go up to London and I hope to catch a glimpse of J. A. before I catch my train to Manchester. I am hoping she left Paris Saturday, for there are [uneasy] rumors of a railway strike and it would be dreadful to have her marooned in Paris. She is to be with a Mrs. [Illegible] Gould, a lady she had never seen before and I think by the end f the week she will find a place in a hotel for us both. I have almost given up hoping for Germany. Anyway we have not given [page 6] up on sailing on the 23rd.

Your last letter was from Colorado. I am so glad you found your brother better and Lyman. Of course you will be in Bar Harbor when we land but I do hope you will come down to meet us and then on [illegible]. I wonder about J. A.'s [summer]. She does not seem to me just in the mood for a lazy holiday, where she settled down to writing an internationalism, which she talks about a bit. Sometimes she says she would like to spend the summer in Switzerland with Emily Balch writing but [illegible] she says she will come over with you next year and do that. I hope she will write and I should think that now, with the Congress for which she has [illegible] herself all these years safely over, she could begin to speak out, shouldn't she? we get few magazines here, but from there we are it does seem as if free speech were returning to America.

Love to Eleanor. This is a tomb in the Cathedral to a very devoted Lady [Elihonor?]. I wonder if that is the one [final name?]. Hamilton tells Smith about her visit in England and her hopes to meet up with Addams in London.

Some names have not been identified.