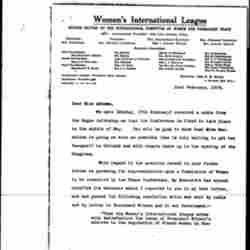 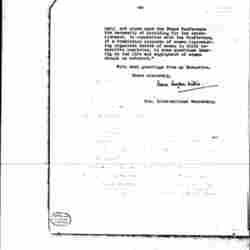 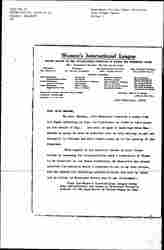 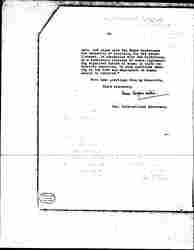 We have (Monday, 17th February) received a cable from The Hague informing us that the Conference is fixed to take place in the middle of May. You will be glad to know that Miss Macmillan is going as soon as possible (she is only waiting to get her Passport) to Holland and will remain there up to the opening of the Congress.

With regard to the question raised in your former letter re pressing for representation upon a Commission of Women to be consulted by the Peace Conference, My Executive has since modified its decision which I reported to you in my last letter, and has passed the following resolution which was sent by cable and by letter to President Wilson and to our Government: --

"That the Women's International League notes with satisfaction the terms of President Wilson's address to the deputation of French women in January, [page 2] and urges upon the Peace Conference the necessity of providing for the establishment, in connection with the Conference, of a Commission composed of women representing [organized] bodies of women in their respective countries, to whom questions bearing on the life and employment of women should be referred."

With best greetings from my Executive,

Willis updates Addams on British plans for the International Women's Congress and their request to President Wilson to include women in the Peace Conference.