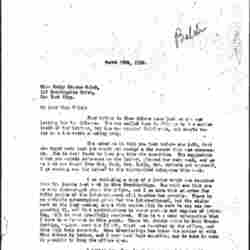 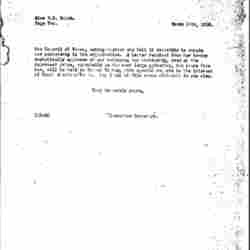 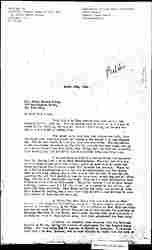 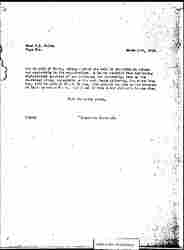 Your letter to Miss Addams came just as she was leaving for New Orleans. She was called back to Chicago by the sudden death of her brother, but has now reached California, and starts today on a two weeks speaking trip.

She asked me to tell you just before she left, that she hoped very much you would not resign a day sooner than was necessary. She is very loath to lose you from the committee. The suggestion which you made in reference to the letter, pleased her very much, and as we have now heard from Mrs. Mead, Mrs. [Kelley], Mrs. Andrews and yourself, I am sending out the letter to the thirty-five delegates this week.

I am enclosing a copy of a letter which was received from Dr. Jacobs last week by Miss Breckinridge. You will see that she is very discouraged about the office, and I am sure that an order for fifty copies of the Internationaal will hearten her greatly. There is no definite subscription price for the Internationaal, but the statement on the last number, shows that copies will be sent to any one requesting it, and that contributions to cover postage and expense of printing, will be most [gratefully] received. This is the only information that I have in reference to this point. Since Dr. Jacobs wrote to Miss Breckinridge, we have sent her $60.00, which was received in the office, and this will help somewhat. Miss Breckinridge has taken the matter up with Miss Addams by letter, and I very much hope something may be done to make it possible to keep the office open.

A letter from Mrs. Leach was received just as Miss Addams was leaving for California, and gave most encouraging news in reference to the situation in New York. I have written to Mrs. Williams telling her how much it will please Miss Addams if she accepts the position as Honorary Chairman of the Board, and I shall be very very glad indeed, if I am able to write to Miss Addams soon, that this adjustment has been made.

A letter has recently been received from the National Council of Women, asking for renewal of membership for the Woman's Peace Party. The dues being $25.00 instead of $10.00 as formerly. I referred this letter to Mrs. Spencer, who is most closely in touch with the work of [page 2] the Council of Women, asking whether she felt it desirable to retain our membership in the organization. A letter received from her [today] emphatically approves of our retaining our membership, even at the increased price, especially as the next large gathering, two years from now, will be held in United States, with special regards to the interest of South American Women. May I ask if this seems advisable to you also. 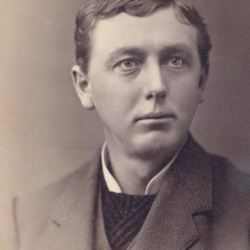 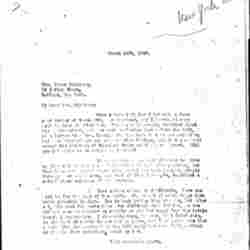 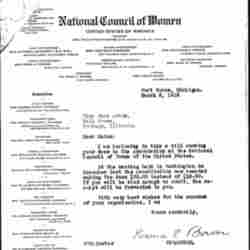 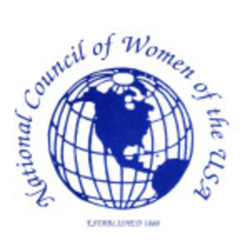 Karsten tells Balch that Addams hopes that she will not resign from the American Committee of Five of the International Committee of Women for Permanent Peace, and provides news of the peace movement.