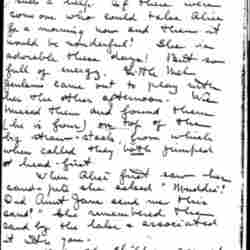 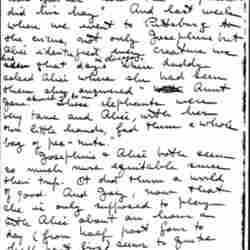 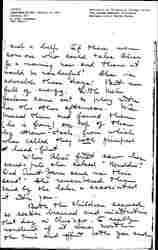 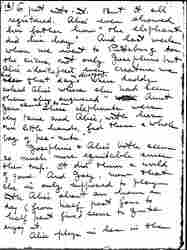 [missing first page(s)] such a help. If there were someone who could take Alice for a morning now and then it would be wonderful! She is adorable these days! But so full of energy. Little Mel Jenkins came out to play with her the other afternoon. We missed them and found them (he is four) on top of the big straw-stack, from which when called they both jumped head-first.

When Alice first saw her sand-pile she asked "Muddie! Did Aunt Jane send me this sand?" She remembered the sand by the lake & associated it with you.

Both the children seemed so scatter brained and inattentive that day in Chicago, I really wondered if it were worth the time and effort both you and [page 2] I put into it. But it all registered. Alice even showed her father how "the elephant did his hay." And last week when we went to Pittsburg to the circus, not only Josephine but Alice identified every creature we ↑had↓ seen that day ↑in Chicago.↓ When daddy asked Alice where she has seen them she answered "With Aunt Jane ↑showed it to me."↓ These elephants were very tame and Alice, with her own little hands, fed them a whole bag of [peanuts]."

Josephine & Alice both seem so much more equitable since their trip. It did them a world of good. And Joey, now that she is only supposed to play with Alice about an hour a day (from half past four to half past five) seems to quite enjoy it.

Alice plays in here in the [remaining page(s) missing]

Haldeman-Julius tells Addams about her children.