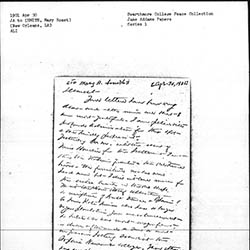 Katherine W. Hardy was a teacher who trained at the Louisville Free Kindergarten Association. In 1894 she organized a training school for kindergarten teachers. This later became the Kingsley House, a settlement in New Orleans where she was the head resident. Hardy died in 1954

She married Joseph M. Califf, a brigadier general in the US Army, in 1902. They had three daughters: Lucy, Catherine, and Josephine, and one son, Joseph.