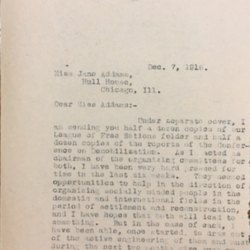 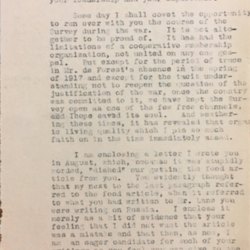 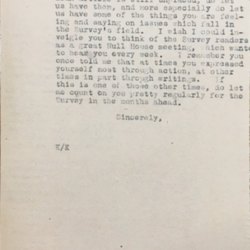 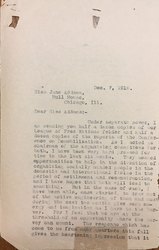 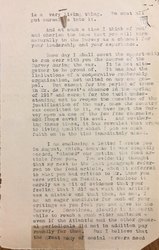 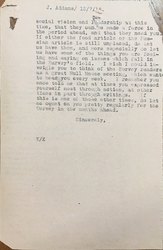 Under separate cover, I am sending you half a dozen copies of our League of Free Nations folder and half a dozen copies of the reports of the Conference on Demobilization. As I acted as chairman of the organizing committees for both, I have been very hard pressed for time in the last six weeks. They seemed opportunities to help in the direction of organizing socially minded people in the domestic and international fields in the period of settlement and reconstruction, and I have hopes that both will lead to something. But in the case of each, I have been able, once started, to draw out of the active engineering of them and must during the next two months give such energy and imagination as I have to the Survey. For I feel that we are at the threshold of an opportunity where the Survey can count. The response which has come to us from many quarters this fall gives the heartening impression that it [page 2] is a very living thing. We must all put ourselves into it.

And at such a time I think of you and cherish the hope that you will turn naturally to the Survey as a channel for your leadership and your experience.

Some day I shall covet the opportunity to run over with you the course of the Survey during the war. It is not altogether to be proud of. It has had the limitations of a cooperative membership organization, not united on any one gospel. But except for the period of truce in Mr. DeForest's absence in the spring of 1917 and except for the tacit understanding not to reopen the question of the justification of the war, once the country was committed to it, we have kept the Survey open as one of the few free channels, and I hope saved its soul. And weathering these times, it has revealed that organic living quality which I pin so much faith on in the time immediately ahead.

I am enclosing a letter I wrote you in August, which, because it was stupidly worded, "dished" our getting the food article from you. You evidently thought that my next to last paragraph referred to the food article, when it referred to what you had written to Mr. Lane you were writing on Russia. I enclose it merely as a bit of evidence that your feeling that I did not want the article was a mistake and that then, as now, I am an eager candidate for such of your writings as you feel you can give to the Survey. Sometimes, clearly it is worthwhile to reach a much wider audience -- even if the Atlantic and the other general periodicals did not in addition pay roundly for them. But I believe that the great body of social workers need [page 3] social vision and leadership at this time, that they can be made a force in the period ahead, and that they need you. If either the food article or the Russian article is still unplaced, do let us have them, and more especially do let us have some of the things you are feeling and saying on issues which fall in the Survey's field. I wish I could inveigle you to think of the Survey readers as a great Hull House meeting, which wants to hear you every week. I remember you once told me that at times you expressed yourself most through action, at other times in part through writings. If this is one of those other times, do let me count on you pretty regularly for the Survey in the months ahead.

Kellogg asks Addams for more articles for the Survey and discusses its role for social workers.